One day of MARTA is all it took to get me back to taking the Jackmobile to work. While I certainly enjoyed zipping past all of Atlanta’s rush-hour gridlock on Friday afternoon the experience wasn’t rewarding enough to get me to become a full-time rider.

Today’s Daily Challenge
Press palms together in front of you, elbows pointed out, and gently push your hands to each side.

Wrists, forearms, and hands can become stiff and sore after a day of working at a computer, doing chores around the house, or gripping a steering wheel. While you may not be able to cut back on these repetitive motions, stretching can help keep your wrists pain-free and flexible.

Now this is something that I need to do more often.

An Overall Busy, But Good Weekend
On Friday night I met up with photogs at Thinking Man Tavern near Decatur. The occasion was the two-day return of one who left the fold a few years ago. We sat around and shot the shit for awhile before I went home and passed out on the couch before 10pm.

I met them all again on Saturday morning and we did breakfast at The Majestic, a trip to the High Museum of Art, had lunch at Star Provisions and ice cream at Jeni’s Ice Cream (side note: had the line been as long as that shown on the website I would have skipped the ice cream portion of the day) before Maria had to head to the airport to return to San Francisco. After finally making it home again I took a nap, and then wound up meeting my boss at Wrecking Bar Pub for an afternoon of beer and food before I went home and passed out on the couch before 10pm.

I was awake early yesterday and in the office by 8am, but for some reason I had very little mojo (looking outside at a perfect Sunday while you are in the office on your day off perhaps?) and left around 3pm. I drove home listening to the Braves game on the radio and after sitting at home for not more than ten minutes had arranged to meet the boss at his place at 5pm to go for a walk. Hank lives near Clairmont/Buford so we managed a 5.6 mile hike around Peachtree-Dekalb Airport seeing and hearing a raucous fiesta taking place in Plaza Fiesta (aptly named I’d say). We decided to save a few shekels so instead of ruining our exercise by going out to eat we made some hamburgers at his place and drank some of the spoils of my travels (read “beers I purchased in Florida and Texas”) instead. I know that I passed out on the couch prior to 10pm last night because I woke up shortly after Mad Men started. I was too groggy to watch last night’s episode, so please, no spoilers today. 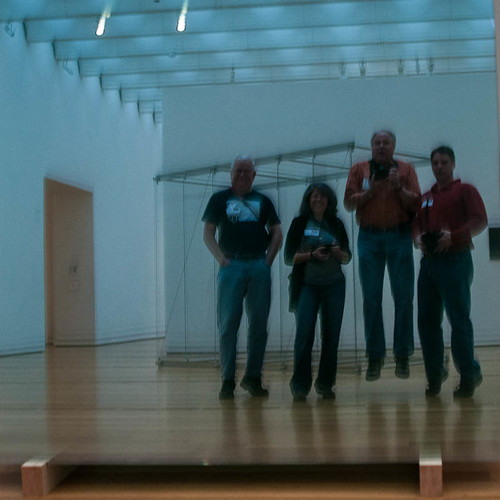 On Saturday morning a gang of eight met at The Majestic for breakfast but only four hearty souls made the trek to the High Museum of Art for some additional fun and photography. In case you can’t recognize me, I’m on the far right, attempting to elongate my body to hide the bulging fat. 😉

Looking Through Different Glass
So two things happened this weekend:
1. I shot my DSLR, enjoyed it like I had in the olden days and may have gotten the photography bug again.
2. I nearly purchased my plane ticket to Brussels. This will happen this week.

In consideration of spending up to two weeks traveling in Europe I have decided that my beloved Nikon D300 and all of its heavy components will not make this journey. Instead, I am going to go with the much lighter and more compact Nikon V1. This decision provided me with a buying opportunity(!) and you know that pleases me. 😀 Because I only own a single 10-30mm lens for the Nikon V1 I decided to purchase the Nikkor 30-110mm lens for this camera body. With the V1’s CX lens mount’s crop factor of 2.7x this new lens will supply me with an effective focal range of 80-297mm, which is ideal for my traveling purposes.

More photos for this blog can’t be a bad thing, right?

Today’s Personal Project
It’s Cinco de Mayo! Although it’s unlikely I may head to an Irish bar (The Elder Tree?) before going to The EARL for tonight’s Dick Dale show — assuming I can stay awake until the 77 year-old Dale (his birthday was yesterday) takes the stage.

While I will certainly be thrilled to hear Dale play again I do wish that I lived a little closer to Athens (there’s a phrase I don’t type often) so that I could attend tonight’s M. Ward show at the 40 Watt.

Stats & Goals
Daily
Current Mood – nervous about tomorrow’s demo because I don’t think all is in order yet.
Current Music – silence at the moment
Website Of The Day – The guys at Myth Busters also run the site Tested. Nerd away, friends! Nerd away…
Mode Of Transportation To Work – my car
Exercise (b)Log – Sunday = walking, ~5.6 miles
Morning Weigh-In – Arg, I keep failing to jump on the scale

7 Responses to Back In Jack