Just think, if the bicycle wreck hadn’t happened three years ago, and then I didn’t acquire tendonitis in my left foot last year, today would mark fifteen years of continuous hashing of me.

What, you’ve not read about how I started hashing? Well, then keep reading friend.

This exercise boosts flexibility in your shoulders by using the full range of motion of your shoulder joint. The “washing” motion straightens and bends the joint as far as it will go. This helps keep your shoulder mobile for activities like brushing your teeth, throwing a ball, raking, or waving.

Then “Paint” a fence, Danielsan.

How It All Began
The year was nineteen hundred and ninety nine, a mere seven months prior to the end of the world thanks to Y2K. I had just moved to East Atlanta and at that time was a real runner, and a semi-svelt 180 pounds (ladies, why you weren’t interested in that version of me I still don’t understand) and had only heard the term “hashing” from my friend Wendy (another missed opportunity) who, upon hearing that I was a member of the Atlanta Track Club replied “Really, I figured you would be a hasher.”

One early-weekday evening I was sitting at the bar of Gravity Pub (as I did many nights back then, hell, I even walked to the bar!) and overheard two guys talking about running. I assumed they were talking about a local running group, and since I was new to the hood I was all ears. When I successfully inserted myself into their conversation one guy said that he was talking about hashing. He introduced himself as “Catamite” and said that the hashers would be having a happy hour at Gravity Pub that Friday night.

Even in 1999 I was well-versed in the term “Happy Hour” and given that my office was not too far (in February the company for which I was working was purchased and our office moved to I-85 at North Druid Hills) I was able to make it down to East Atlanta by 5:00-5:30pm. Back then I did not know of “hasher time” and didn’t realize that their “Happy Hours” starts much later than my concept.

Around 8:00pm I was about to give up on the hashers when I realized that four people at the end of the bar playing darts were more hashers; you know these people as “Whiner”, “MC”, “Sanitary Not!”, and “Bunny Banger”. I walked over and introduced myself and started drinking, talking, and throwing darts with them. As time passed more hashers arrived, including a young lass who interested me (at this time I was fairly-newly-dumped), so I stayed.

This Friday night was the start of Hedon (well, at least back then it was) and Sanitary told me that I should come out to the hash on Monday night, that it would be about three miles long, and she knew that I’d be able to do it since she was going to lay the trail.

On Memorial Day 1999 I remember being unsure about going to this thing called “hashing”. However, I remembered (some how) that Sanitary said that the hash started at the Publix on Memorial Drive just outside I-285, which isn’t all that far away, so I went. I drove my pre-Jackmobile car: 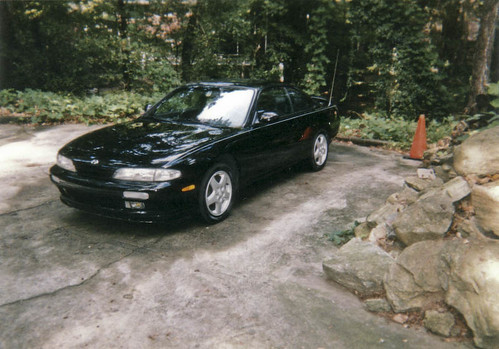 to that Publix and was the first one there (surprised by this? why?). As I stood waiting a Mazda Miata pulled into the lot with a license “JAMMIES” and the driver looked like a hasher so I went up and confirmed that I was in the right place.

As a (then) runner this hash was easy, however either no one told me to bring a change of clothes or I simply didn’t remember because at the end I had nothing in which to change.

At the on-in I met many people, but I think the think the instance I realized that I could be a hasher was when I was standing drinking a 24-ounce Fosters talking to a guy named “Ultra Pastorized” (who as you may guess is a minister) and a guy named “Goldilocks” came up and while describing what happened to him at Hedon proceeded to drop his shorts and show us his ass — and this did not offend me.

And the rest is historyâ€¦

Walk, Paulie, Walk
I don’t know what got into me on Saturday. Around 11am I drove up to the LA Fitness in Brookhaven with the intent of going for a long walk. A long walk I got. I somehow managed to head around part of Murphey Candler Park and by the time I wound my way back to the club I had covered 8.6 miles! 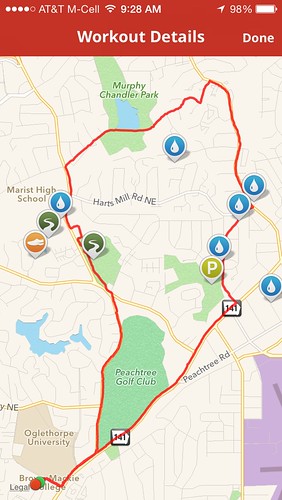 Of course I managed to undo all of this goodness later that night by going to Pure Taqueria for a couple of sangrias, then to Barcelona Wine Bar for a fantastic dinner, and then to Inman Perk for two more beers.

Racquetball, Paulie, Racquetball
Yesterday I met up with the boss at the same LA Fitness for about ninety minutes of racquetball. We then managed to undo some of that good work at the nearby Olde Blind Dog Pub where I had a couple of pints and a reuben.

Ride?, Paulie, Ride?
While I’d love to tool around on a bicycle today I might have to pass and make today a day of work and maintenance instead. If I do this successfully two of the things that will get maintained are my mountain and road bikes.

Today’s Personal Project
Figure out what I want to do tonight.

Stats & Goals
Daily
Current Mood – not bad, glad not to be at work even though I know I’ll be doing some coding for the company later because I love to code
Current Music – listening to Manchester Orchestra’s latest record “Cope”
Website Of The Day – (Hopefully) you have the day off from work too, challenge your mind today at Math Puzzle.
Mode Of Transportation To Work – N/A (HUZZAH!)
Exercise (b)Log – Saturday = walking, ~8.6 miles; Sunday = racquetball, ~90 minutes
Morning Weigh-In – The scale says I weigh 216 pounds (I believe it), it also thinks I’m still 46 (I wish)