In theory BRAG (Bicycle Ride Around Georgia) seems like it could be a lot of fun, and if I worked for a company that was a little more generous with vacation time I’m sure I would have done it at least once by now.

I’m also sure that commenting around these parts will be lighter than usual because I know ITP-Readers Barb and Bob are spending the week tooling around Georgia on two-wheelers.

Today’s Daily Challenge
Cross your ankle over the opposite knee and lean forward for five breaths. Switch legs and repeat.

After sitting for long periods, tightness in the hips can lead to lower back pain. This move stretches the muscles responsible for rotating your hips away from your body. Stretching keeps your hips flexible, mobile, and free of soreness.

A Packed Weekend
I’d list all of the little things I accomplished puttering around the house this weekend, but you’d be bored to tears.

On Friday night I joined a few folks for drinks and music at Smith’s Olde Bar. We were there to support one of my boss’ friends who leads the band “Cherry Bomb”, a Joan Jett cover band. The night was fun, though I didn’t last for the entire set and returned home around 11pm.

I spent most of the day Saturday inside the ITP estate, finally exiting my lair for dinner. I was in the mood for Mexican, the type that gives you chips and salsa for free, and I didn’t want to deal with the hipster crowds. Me? A curmudgeon? Even I couldn’t believe that I convinced myself to drive all the way to Pancho’s on Buford Highway for this. I stunned to find that Pancho’s now has valet parking (always a deterrent for me) so I continued my journey further up Buford Highway. By the time I settled on a place to eat I was at Chamblee-Tucker and pulling into Pollo NorteÃ±o (I should have packed my laundry!). I had a delicious meal and watch something called “fÃºtbol” on their television.

I met up with ITP-Reader Terri and her clan at The EARL on Saturday night for the The Rock*A*Teens show. The Rock*A*Teens were a band formed in Cabbagetown in the mid-1990s and broke up sometime in the early 2000s. While I listened to a lot of local music back then I was mostly unfamiliar with The Rock*A*Teens catalog, and I seemed to be one of the few based on the crowd’s knowledge of each and every song, but I had a good time nonetheless, getting home a little after 1am.

Yesterday I continued my early rising and house puttering, getting up by 6:30am and eventually starting what turned out to be a two-hour install of Mavericks on my home computer. At some point I received an email from my boss about racquetball, so yesterday afternoon we knocked the ball around the court for awhile at the Brookhaven LA Fitness. After having dinner and a few pints at There I returned home and passed out before 10pm.

My only regrets are that I did not yard maintenance nor did I get out on my bicycle this weekend. 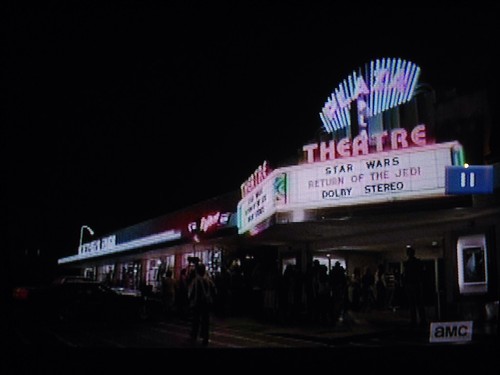 (It’s a low quality image because I took a photo of a twelve-year-old television screen.)

On Saturday night I gave myself some time to watch television, and what I chose to watch was the recording of AMC’s newest television show “Halt And Catch Fire”. (side note: I did not watch episode two which aired last night, so please, no spoilers) The show is based around a Texas company who reverse-engineers an IBM PC back in the early 1980s; I’m a nerd, this intrigues me. I’m sure the computer-related content will subside as quickly as the advertising-related content did on “Mad Men”.

With all of the movies and television shows being shot in the Atlanta area I was curious about whether or not this show had any ties to the area. It took no longer than ten minutes for this shot of the Plaza Theater to confirm my suspicions.

Ah, Bologna
I left the house early enough this morning to stop into Publix to buy some money-saving food items. My goal was not to shop thoroughly but rather to quickly buy the three items necessary for making some sandwiches for lunch (and apparently breakfast as I just finished eating one now). I’m kind of proud of myself because I purchased three things — a loaf of bread ($4.29 because I don’t like to skimp on bread), two packages of turkey bologna ($3.29 and BOGO), and two packages of cheese (two for $5) — with tax brought my total to $13.

Considering I spend $7 for a single lunch from the downstairs cafeteria I can save considerable amounts of money over time if I stick to a plan such as this.

Stats & Goals
Daily
Current Mood – not too bad
Current Music – silence at the moment
Website Of The Day – I need to be more prudent about how I spend my money. Because of this I’m sure I’ll reference Atlanta on the Cheap often.
Mode Of Transportation To Work – my car
Exercise (b)Log – Sunday = racquetball, ~90 minutes
Morning Weigh-In – 216 pounds (2014-05-30), perhaps I didn’t want to know because I didn’t get on the scale yesterday

10 Responses to I’m Not BRAGging