My birthday was okay, not the best I ever had.

Germany must have not want me to leave because my train from Bremen to OsnabrÃ¼ck was conveniently late causing me to miss my connection to Amsterdam; another useless two hours in a German train station.

When the next train arrived it was jam-packed with twenty-somethings, this was the first time I saw so many young people on a European train.

Things To Do In Amsterdam If You Don’t Smoke Weed
I was going to use this as the title of today’s post with a blank body since I have no interest in smoking pot (so he says publicly) nor seeing risquÃ© acts (never did much for me).

I wasn’t ready for the vastness of Amsterdam, the number of Argentinian steak houses it has, or the frustration I would encounter trying to figure out what I wanted to eat for my birthday dinner without spending 30+â‚¬. After winding my way around nearly a million slow-walking tourists I wound up eating shitty pizza slices because I just needed to eat something.

After eating I went to an “American Beer Lounge” which stocked nearly exclusively American beers. “What?” I can hear you say…. fear not, I drank two beers from Denmark, none of the American brews.

My night ended with my finding a gelato shop and indulging my desire for a birthday dessert. 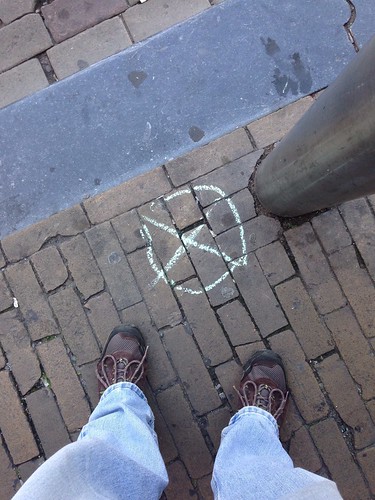 While walking around town I saw a “BS1” with an arrow written in chalk on the ground. When I came across this check there was no denying that I came upon trail.

I followed trail for a while but ultimately lost it. After walking around some more I saw a sign for a brewery, needed a beer, and wouldn’t you know found the hash. I said hello to Shit Happens, and took a photo of him to send to ITP-Reader Barb as a joke to prove I had stumbled upon the hash. Since I didn’t know any other hashers in this crowd and I had yet to eat dinner by that time I split from the hash and wandered solo again.

A Rough Start To Forty-Nine
I am suffering today with some of the symptoms of becoming an old man. Actually what is plaguing is something that has plagued my for a few years, so maybe I have been old for awhile. It’s time for me to change my ways and improve my health again.

I’d sure I have more to say today, but it’s nearly 8am here and I need to get my day started.