Last night’s German class was fine, but as I’ve stated many times before I really need to start putting in a greater effort to learn. My trip to Germany takes place in less than a month!?!? In an effort to force myself to practice more I signed up for a class “German for Travelers” which will be held this Saturday from 9:30am-3:30pm. Talk about additional practice time… The class cost me $75, since I am a member of Goethe Zentrum, and I found out last night that it will be taught by the teacher with whom I took three classes in 2014-2015.

Last night I also found out that the approaching Summer “quarter” will only be eight weeks instead of ten; this bums me out because I am already scheduled to miss two classes — one while in Iowa, and one while in Vermont — which is now 25% of the quarter instead of 20%. There is also a likelihood that I could miss one more class depending on how I schedule other travel. 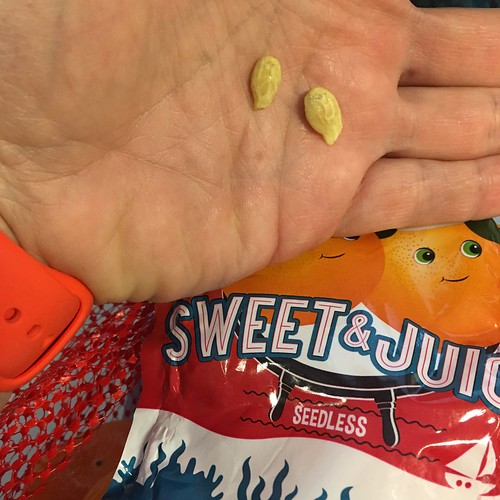 These must be orange “pits” and not “seeds”.

I purchased this bag of oranges yesterday at Kroger. Clearly the packaging states that these are seedless oranges. I encountered a seed in the first orange segment that I put into my mouth! It’s a damn good thing that I know to always bite gingerly into orange segments (or to hold them up to light first so see if they contain seeds) and that I didn’t crack a tooth otherwise there would be a lawsuit in the making.

I have little hope for the rest of this bag being seedless.

I’ve brought the bike with me today in hopes that the weather will be amenable and that I feel motivated to ride tonight.

I have a million other things to do tonight so I won’t feel too bad if the weather turns sour and I cannot ride, but it would probably be best if I do get out and get some exercise tonight.

11 Responses to More Pay To Practice