And you are probably reading this on the 5th.

Today’s themeless post will contain a myriad of thoughts that have been bouncing around my head but have never made it into a recent post.

Much Riding, And (So Far Only) One Puncture
I managed to survive Friday night Spin class. Whew!

On Saturday morning I met up with my coworker Al and rode the Saturday morning ride from Free Flite in Sandy Springs. It was a moderately-paced 25-mile loop consisting mostly of roads that I’ve ridden on Wednesday and Monday nights. Also in attendance was Catherine (aka “Saddle Sores”), who told me that she and Dave will be having their Cheesy Tour de France party again this year. The party will be on Sunday, July 10th. Can someone send me their new address?

Yesterday I awoke and ventured out for a solo 40-mile ride using my Stone Mountain route. I only did the outer loop of Stone Mountain park so I was forced to add mileage onto the end of the route. As seems to happen every time I do this I punctured. While riding through Inman Park I may have hit a rock, and then like clockwork I heard “pfft, pfft, pfft” from the rear wheel. Dangen! A short while later I was back on the bike cautiously finishing the final four miles of my route.

Today I will be driving to do the Silk Sheets ride with Atlanta Cycling. This plan flourished on Saturday morning when Al said that he was going to ride it. 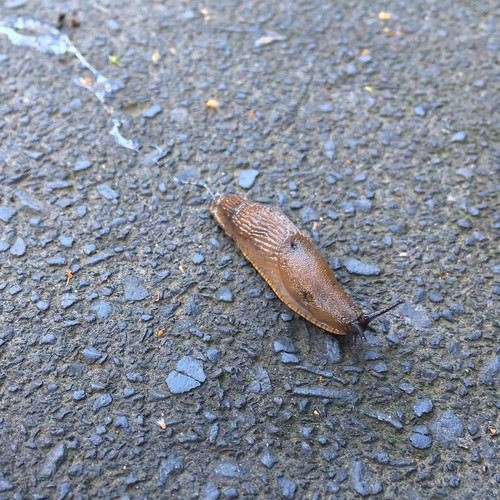 One of the things I love about the German language is their compound nouns. In German a “slug” is called a “Nacktschnecke”, literally translated, a “naked snail”.

Yikes, That’s Expensive
Yesterday I met my boss, a friend of his, and a friend of hers, at Local Three for drinks/dinner. I’d never been to the establishment which is on Northside Pkwy, a little south of Paces Ferry so I was interested in meeting up with them. The establishment certainly thinks quite well of itself, at least if their prices are any indication. I had a few Great Divide Titan IPAs, at $7/bottle, and shared food — a cheese plate, a charcuterie plate, and some beet hummus — with the table. My fourth of the evening’s affair was $41, which doesn’t sound like a lot until you realize how little food we ate.

Yeah Deutschland!
On Saturday afternoon I went to the Goethe Institute and watched Germany play Italy. It was a tense affair, and to make matters worse I had to leave at the end of regulation with the score tied 1-1 because I had a haircut appointment at Ansley Mall. As I found out post-haircut Germany prevailed in penalty kicks.

Germany will play France in the semi-finals on Thursday afternoon. Thursday could be a big day…

Lining Things Up
I booked my flights to/from Denver for Colorado Invihash; I will fly to Denver on August 31st and return on September 7th. I actually considered driving to Winter Park, with hopes of overcoming the memory of the Jackmobile’s transmission failure six years ago, but that meant missing the final German class of this quarter. Since I will already miss two of the eight classes (one while I am in Iowa, one while I am in Vermont) I didn’t want to miss a third. At least I was able to get a Comfort+ seat on Delta for less than $300, so that’s not too bad.

Hope have/had a great and sage 4th of July!

4 Responses to Happy 4th Of July