I’m back in the EATL. Thankfully the worst part of Delta’s flight yesterday was the time that it left Burlington, Vermont — 6:10am.

We began Friday by taking an hour-long ferry ride from Vermont to New York. 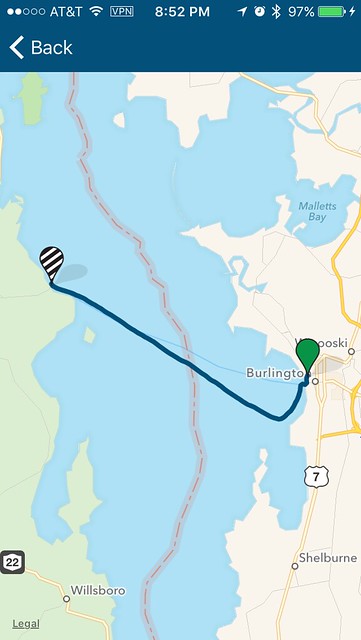 Here’s the map of the actual bike riding we did on Friday, you can see where I decided to stop GPS, missing some of the ferry ride as well as the two-mile stretch ridden from the ferry that took us back to Vermont to Sojourn’s office. 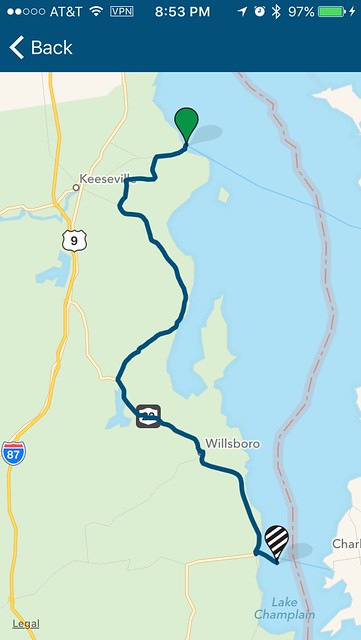 The ride on Friday also contained about 1500′ of climbing over a 23-mile course. At one point toward the end I sprinted to lead a pace line only to find out a couple of miles down the road that no one stayed on my wheel! 😀

I spent Friday and Saturday nights back at the hostel in Burlington. I was again on my own as I was the only one of the sixteen riders to spend time in Burlington. Friday night was interesting, as I was awoken by a young couple having sex in a bunk near mine, at least until someone walked by and told them to stop. Unfortunately it rained hard for most of Saturday, putting the kibosh on my walkabout plans as well as the air show that was scheduled that day.

Perhaps the only disappointment of the trip was getting on the scale today to see that my weight is still over 210. My metabolism must move as slowly as molasses these days.

Uber Bested Lyft On This Trip
When I left East Atlanta a couple of Fridays ago it was 3:15pm. Because of this Lyft deemed it to be “high demand time” and charged me an additional 150% on top of the normal fee, thus my ride from East Atlanta to the Candler Park MARTA station cost me over $15. Even though I know that Uber also has a high-demand tim policy, Lyft lost me as a customer for the rest of this trip.

In Burlington I Ubered from the airport to the hostel, from the hostel to the Burlington airport (at 4:15am), and from the Candler Park MARTA station home, never even considering Lyft.

I’ll reevaluate my ride-sharing company of choice again in a few weeks. 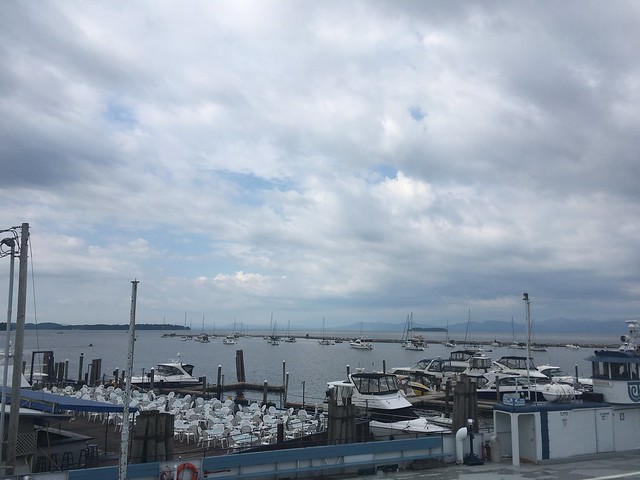 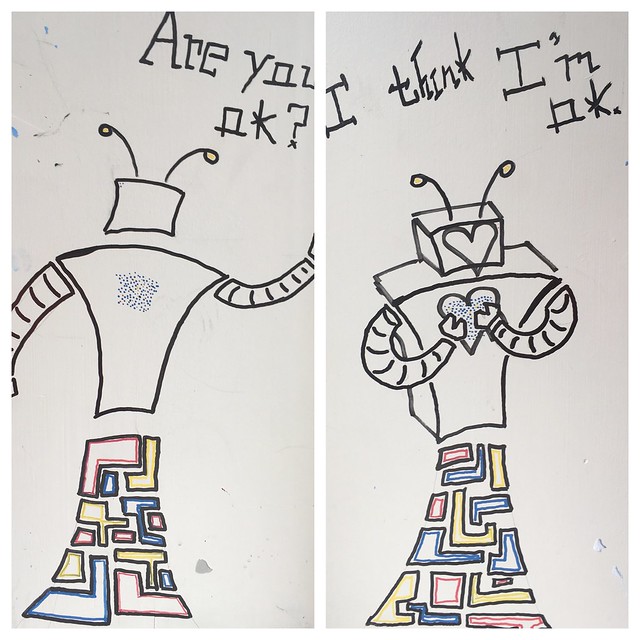 These two pieces are on opposing sides of a window at the Burlington Hostel. I liked them a lot, so I decided to take photos of each and try to bring them together.

Where Next?
I’ll be in Atlanta for the next two weeks. I need to start taking care of some things in my life, like reminding myself that I will need to have employment again sometime in the future.

Today’s task is to wash and dry the three huge bags of dirty clothes that currently sit on my bedroom floor. Tonight I will be headed to The EARL for the first time in a long time; I’ll be seeing Kyle Craft, former lead of the band Gashcat (who very few people knew).

In two weeks I’ll be taking off for a week in Colorado, surrounding the weekend of Colorado Invihash. Three trips in two months, by then I might finally having the whole packing thing figured out.