Taking Lazy To A New Level

Holy crap, it’s 8:45am? Guess I should get a blog post out today before I have to clean up and meet some friends for lunch…

I’m Not Color Blind, I’m Color Dense
I think that I need to consider upgrading the lighting in my bedroom. On Tuesday I once again went into the world wearing a color combination that didn’t work. I did this because I swore that in my bedroom I was holding my blue shorts, but clearly when I was out and about I was wearing my olive green ones. I’d made my choice of navy blue sneakers all the more curious. Of course I was at a museum, so I could have always blown off any criticisms with a statement of how I am an artiste! 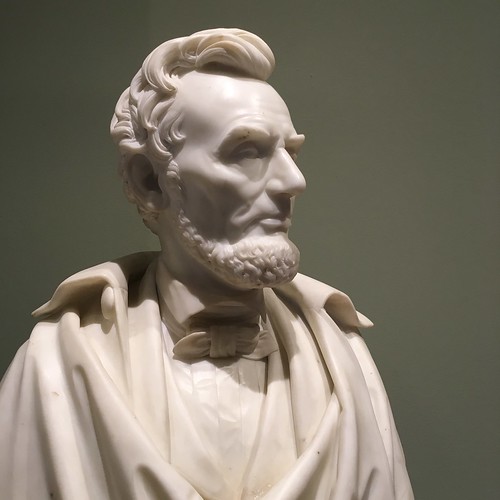 I’ve tried to break myself out of the habit of taking photos of sculptures. However, there was something so striking about Abraham Lincoln’s pose on Tuesday that I had to shoot this.

Damn, I just realized that I should have titled this shot “Penny For Your Thoughts”. DANGEN!

I Never Tried The BBQ, But The Sandwich And Conversation Were Great
Made it to Castleberry Hill around 5:40pm for my 6:00pm meet up. Before I could go admire ITP-Reader Stacy’s paint job up close and personally I was greeted by my friend who was also an early arriver.

We went into The Smoke Ring and were told that there would be a Creature Comforts beer dinner later, so we were sat in the smaller section of the restaurant. No biggie. We asked if we could have their beer leftovers, but none arrived at our table.

Our own beers and an amazing appetizer of fried green tomatoes were ordered and we started catching up and conversing about the creative process. I talked about what my creative process is, and about photography and even my reasoning for starting to learn the German language. After a while we agreed to wander down to Elliott Street Deli & Pub for another beer.

Since we’d never ordered dinner at The Smoke Ring I was glad when she said that she wanted to order a sandwich at Elliott Street. We’d had two beers already and a third one had made its way to the bar, so I was happy to eat. Further, it’s a little-known fact that Elliott Street makes fantastic sandwiches — and “two-bite” cannoli as I found out later.

Elliott Street Deli & Pub has not changed a bit since I last visited; that’s a good thing in my book. Mike and Pete (the owners) still hang out, the interior is still dive-bar-esque, and my friend Dave Rice’s photo of a woman on a motorcycle still adorns the inside of the men’s bathroom. Last night the bar even had a duet of stringed instruments (think “folk” not “classical”) performing for a few hours.

What has changed is Elliott Street itself, now that it has once again opened for through traffic. Once a construction dead end, cars and motorcycles now zip around the neighborhood. And, when I got up from our sidewalk table and turned the corner, I could see the new mechatronic football stadium that is still under construction. I was home by 11:00pm and slept really well, perhaps too well which is why I am still typing this blog at 9:15am.

On Today’s Agenda
I’ve already mentioned lunch. After lunch I will be running some errands — groceries, gas for the lawn mower, banking, etc — before returning home to do some “work” — German and software development studying.

I’ve thrown an offer to meet my (former) boss Hank for a beer, but he’s committed to moving his daughter into a dorm at Georgia Tech today so I’m not sure if this will happen.

Considering it’s Thursday (it is Thursday, right?) I may hoof up to EAV to shop my first East Atlanta Farmers Market in far too many years.

Yesterday I received a Dropbox link to photos taken by the Sojourn staff while we were riding in Vermont. I will peruse these tonight and see if I can find any good, or incriminating, ones of me. 🙂

4 Responses to Taking Lazy To A New Level