Shamefully it has now been a week since I have been on two wheels.

This morning I am a hostage to AT&T. You’ll understand why in a minute, but as of now I am forced to wait from “8:30-12:30” for a technician to arrive to start performing analysis on my U-Verse setup.

The Power Of The Storm
I met up with (former) boss Hank, as well as his nephew who is in town this weekend, at Lucky’s in Brookhaven at 5pm yesterday.

Lucky’s was a convenient meet up spot as I had been to Dunwoody for lunch, and then shopped Costco in Brookhaven, before spending some time at the Brookhaven library.

Nowhere in any of the weather forecasts did I see the potential for the torrential rain, pea-sized hail, and extremely high winds that plagued Brookhaven for over an hour yesterday. The lightning was so close that you’d see the flash and then immediately hear the thunder! Things got so bad that the entire shopping plaza in which Lucky’s is located lost power for at least two hours. We were asked to leave at 7:30pm because they were closing at 8:00pm with no firm commitment for when their power was going to be restored. 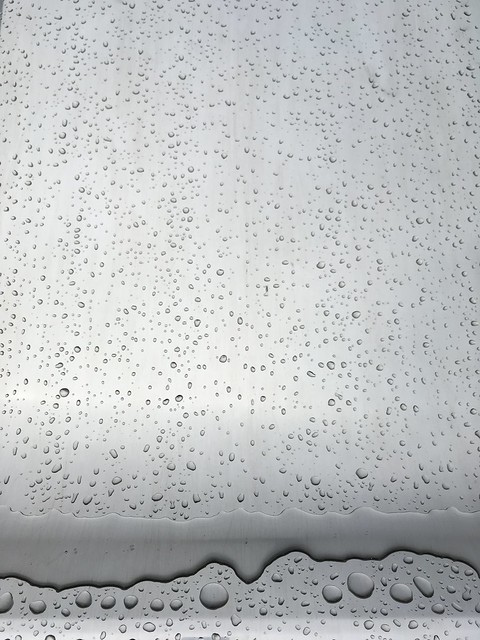 Taken after a strong, but not nearly as disruptive storm on Tuesday.

In case you didn’t know, I love taken photos of water droplets.

The Extended Power Of The Storm?
It wasn’t but a few blocks away that I encountered electricity again, thankfully, since the thought of all traffic lights between Brookhaven and East Atlanta being out made me rather nervous.

Having not eaten dinner, Lucky’s had no way to cook food without electricity, I stopped into Fellini’s Pizza in Candler Park for a salad, slice, and Coke.

I returned home to find that I had no internet nor the ability to make a phone call using AT&T’s U-Verse phone service. I did all the standard tricks of rebooting the modem, reseating cables, whatever, but nothing fixed the problem. With no phone service I tried multiple times to call using my cell phone, but AT&T’s cell service is so spotty in East Atlanta that my calls from the basement were routinely dropped.

I was able to call from the main floor of the house this morning, and hence I am now a hostage to AT&T until they arrive. The better not try to tell me that there is a problem inside the house, though if they want to give me a new modem for free I would be okay with that.

Weekend Plans?
Tomorrow is the East Atlanta Criterium. The EAV Crit is also known to me as the event three years ago during which I met someone who was willing to go out on a date with me, two dates actually, before she told me that I was not “it”. I have not had the good fortune of going out on a date since… I am assuming that if the weather agrees that I will attend.

Sunday is a Black Sheep day, though I admit being fearful of the prediction of “90% chance of thunderstorms” that I am seeing. Keep in mind that it was an August Sunday in which lighting struck near the pack during to On-In and scared the shit out of them. So, I am a tentative participant…

Have a great weekend friends! Perhaps I will see some of you out and about.