It’s Monday already? Even when you aren’t working the weekends go by much too quickly. Today marks the one-month anniversary of my sabbatical.

Really? What Happened To Me?
On Saturday morning I finally got my shit together to get up to Vinings to ride the Saturday morning ride departing from Atlanta Cycling. At twenty-two miles I was concerned that the ride would be too short when compared with the distances I’ve been riding over the past month.

I was cruising with the peloton nicely until “the split”. At “the split” I should have gone left to avoid the hill, but my riding partner Al (who had been complaining of dead legs during the thirty+ mile ride he did before this ride) went straight. I was feeling okay, and on the far right side of the street which made it difficult to take the left turn to avoid the hill, so I went for it. About a third way up the hill I was struct with heartburn (for perhaps only the fourth time in my life!) and was dropped quickly.

All alone with not the greatest sense of where this ride goes I was happy(ish) to find familiar road markers. After a few miles of riding alone Al called me to find out where I was, and was kind enough to turn around and ride backward so that I wouldn’t have to finish solo.

I was embarrassed and disappointed with my effort.

I lunched with Al following the ride at El Pollo Tropical. 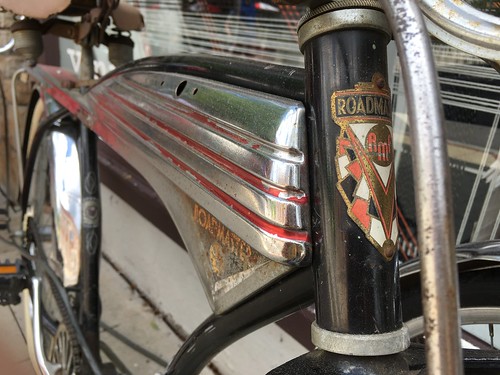 Saw this old gal (or guy if you’d rather) parked on the street while walking up to the races.

A Small, But Vocal Gathering
Upon arriving home and showering I marched up to East Atlanta Village for the annual East Atlanta Criterium. I met up with one of my Flickr buddies, Greg, and sat at Argosy, watching the races from afar which was easy to do since this year’s race didn’t attract a large following. (I’ve said this every year, “I hope the East Atlanta Criterium” comes back next year.)

Given the weather predicted for Saturday afternoon I chose to carry a golf umbrella instead of my camera gear.

As the afternoon wore on, and I had more than enough beer in me, I wandered across Flat Shoals and hung out with the cadre of hashers who had convened. And on that side of Flat Shoals I was able to refill my plastic cup with Bombardier Ale at The Elder Tree Public House.

After the races were over I stopped into Grant Central East for a couple of slices of pizza and a Coke before staggering home.

Sunday, Muddy Sunday
Somehow ten years have passed since that fateful Sunday when I opted to join ITP-Reader Stacy and Phil for a photostroll in College Park instead of running the “Catch The Crabs” Black Sheep Hash held that day. I remember texting “Boner Rooter” later that afternoon asking her how the hash was and she told me that lightning had struck near the on-in, scaring the shit out of all who were there. I made the right decision that day.

Yesterday I tempted the Gods by attending the “Catch The Crabs” hash. It was a good romp through the woods and swamps of Newnan, as I knew it would be, followed by an on-in that was completed under ominous skies. I just made it under the pole barn when the skies opened up, only rain thankfully.

After my weekend’s activities I was pooped and passed out by 9:00pm last night.