In what will become a theme for the next three weeks I have a busy day planned for today. In fact, in addition to my daily chores I also have lunch and dinner plans today.

Planning For My Future
Prior to lunch I must complete the assignment given to me by ITP-Reader John (aka “Ham with Cam”). It has to do with making three lists — “What do you want to do”, “Where can this be done”, “Who do you know that could possibly help you” — that help you march toward your desired future.

Lunch today will be at OK Cafe. I have not been back since they reopened after their fire a couple of years ago, so I am looking forward to seeing how things are these days.

I Almost Planned Another Cycling Trip
I have been joking about looking for a multi-day cycling trip to Louisiana to combat the hills of Vermont, and I found one that will occur in early October. It’s the Ragin’ Cajun Country tour from Adventure Cycling Association. This trip is a seven-day, potentially very short distance (and flat!), trip around southern Louisiana, departing from and ending in, Lafayette.

If the phrase “southern Louisiana” rings a bell it’s probably because you also have heard of the flooding that has been occurring in southern Louisiana in the last month. Because of this I am not sure if this trip will actually occur, or if it’s worth gambling that it will or will not. If I chose to put up the $950 for the trip I could also buy trip insurance to cover its cancellation. However, it might just be wiser to skip this one outright.

ITP Flickr Pic
Again, not one that I took but I spare you from having to look at my ugly mug. 😉 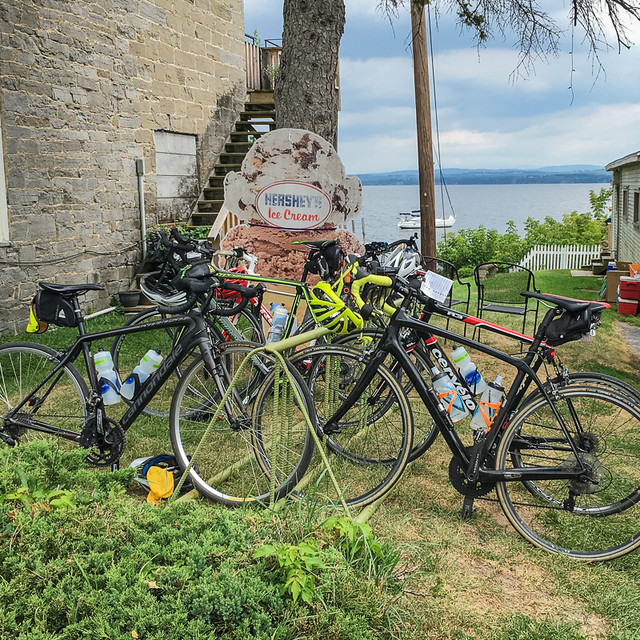 This was the last ice cream stop of the Vermont cycling tour. Across the water is Sojourn’s “international” office. The bike on the left was the bike that I rode the entire week.

German Class Without Drinking, What A Concept
Due to poor attendance of alcohol drinkers last night there were no bottles of wine opened for our German class. None! Keine! I was forced to go the entire class knowing fully that my German is still shit. ScheiÃŸe!

Perhaps it’s because this is a summer quarter that has been truncated from ten weeks to eight, this quarter has seen the most absences of any that I have attended. Of course I am guilty too having missed two of the classes already due to my journeys to Iowa and Vermont.

I’m hoping that things return to normal when the Fall quarter starts in October. October? That’ll give me an entire month between quarters to forget review everything that I have learned.

Yes, I own a lot of combs, but that’s not the point here!

I am certain that I am the culprit who has misplaced these combs (seriously, who else could have done it?), but I’m shocked that in the past week of searching that none of them have reappeared.

In an effort to “comb up” I picked up two new combs during a stop at Kroger after my German class last night. Two? Yes, two. Why? Because not only were they $1, they were “buy one, get one free”.

There is a part of me that you probably don’t understand that is giddy having some order returned to my life.

Speaking Of Ultra-Mega-Mega-Kroger
Do you know that the Kroger on the Moreland-Glenwood Connector Bill Kennedy Way has a bar inside it. A bar! I have yet to partake in the offerings of said bar, but I did see it with my own eyes last night.

6 Responses to Things To Do