Yesterday was a full, but completely enjoyable day.

I Forgot About La Vuelta
It wasn’t until late last night that I realized that I completely forgot to pay attention to yesterday’s stage of la Vuelta a EspaÃ±a.

Not Surprising: A Wonderful Lunch
One of the reasons that I forgot about the race is that I was getting ready and leaving for meeting up with ITP-Reader John at OK Cafe. Had John not reminded me that the portion of the restaurant in which we sat was gutted by fire and completely rebuilt, I never would have known that the fire had occurred.

Lunch was fantastic, John offered up a lot of advice for helping me reach the next stage of my professional career and I ate chicken fried steak, with sides of a baked sweet potato and corn salad. Healthy? Perhaps not. Delicious? Absolutely.

After a filling lunch I decided that since it was a weekday afternoon that I could safely enter the doors of IKEA without the hassle of the weekend masses. I wandered around the carefully-designed displays finding many things that pleased me, but nothing that solved any problems that I currently have. I left empty-handed.

While peering out IKEA’s large windows I saw the ominous clouds building outside. Apparently the afternoon rain that was mildly predicted was going to come down in bucketloads.

ITP Flickr Pic
Surprise! I have no photo for today. Oops.

I almost took a photo of the clouds above the Atlanta skyline, but too many distractions were present in the shot.

Surprise, I decided to add a photo. 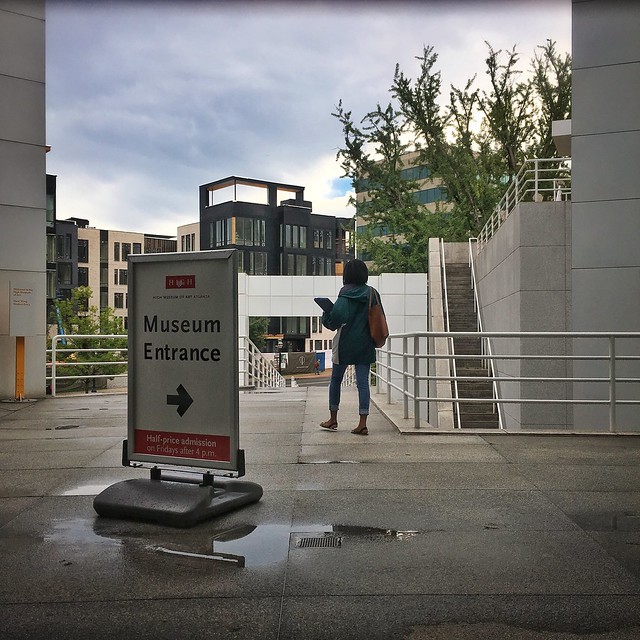 My original plan for this shot was to take a photo of the long, now mostly-unused walkway. And this to my surprise this young lady walked through my frame. Granted it would have been better if she had been walking toward me, but you have to take what you can get.

A Surprise Of Presidential Proportions
With the rain tainting evening plans a new agenda containing locally-sourced entertainment was curated.

“Kro-bar is open. Why not drink there?”

That’s how it all started.

Whilst at Kro-bar I was discussing IKEA and Ok Cafe, which led me to mention Manuel’s Tavern’s renovations and how I wasn’t sure that I was going to like the place now that it’s been renovated (spoiler: I like it less because it’s just not the same place that I came to love; future generations will love it). This conversation convinced us to go to Manuel’s.

For a Wednesday afternoon Manuel’s was sorta busy, but nothing too out of the ordinary. Then we heard from a guy that Bill Clinton was in town and he that he had been tipped off that the former president was on his way to Atlanta’s Democratic Party hub (that’d be Manuel’s Tavern for any non-Atlantans reading this). That’s right, we had accidentally wound up at the right place at the right time. Not only did I get to see former President Clinton, I shook his hand. Pics or it never happened? Not this time, I wanted to live this moment instead of capturing it to bits on a phone. Channel 46 will back me up.

Tonight’s Performer Will Be A Surprise
A week ago I heard an NPR podcast do an interview with one of the founders of Sofar Sounds, a service that organizes intimate concerts once a month in cities throughout the world. I immediately signed up.

I was selected for tonight’s concert in Atlanta, it’s in the Ansley Mall area. I have paid $10 to attend. I’ll let you know all about it in tomorrow’s blog.

8 Responses to Full Of Surprises