Not To Be Repeated
On Tuesday I went to the public library on Ponce. Suffice to say that will never happen again. A security guard inside the library? WTF? However the real kicker was the lack of sufficient air conditioning. It was terrible.

Almost A Perfect Day
I had lunch in Atlanta and dinner in Denver.

On the plane I finished reading “Moonwalking With Einstein”.

My flight was only slightly late arriving in Denver.

A lot has changed in the “Mile High” city since the last time I visited six years ago (see also: Jackmobile’s transmission dying).

Last night as I wandered downtown looking for food I smelled the not-so-unmistakable aroma of marijuana.

I flew from Atlanta to Denver and then took the new-to-me rail from DIA to downtown. I scored a bonus by getting a day pass from a fellow Gator while I was awaiting the delivery of my luggage, saving me the $9 fare. While the rail is a convenient way to get from the airport to Union Station downtown it is dog slow, taking no fewer than thirty minutes to make the journey.

From Union Station I should have Ubered to my hostel, but it looked close on Google Maps so I hoofed it instead. Even in 42% humidity I still managed to work up a sweat.

My sweat (or age) must have delivered pity to the guy checking me in, because he gave me a free beer ticket. From the reaction of the bartender when I presented it this must be a rare occurrence.

Wanting Mexican I wandered around downtown looking for El Charrito, and damn it all to hell I was so glad to find it. I stepped into the empty bar/restaurant to the sounds of punk! After a few songs during which I air-drummed the DJ came to me and asked my name. A few minutes later he bought me a shot of Jim Beam. Wait. What? For the entire evening I jammed to what he was spinning as it transitioned from punk to ska, and then eventually to hip hop. Four O’Dell’s “90 Shilling”, a burrito, and my shot of Jim Beam later I was tipping the bartender as well as the DJ before walking back to my hostel. There was but one thing missing from making it a perfect night… 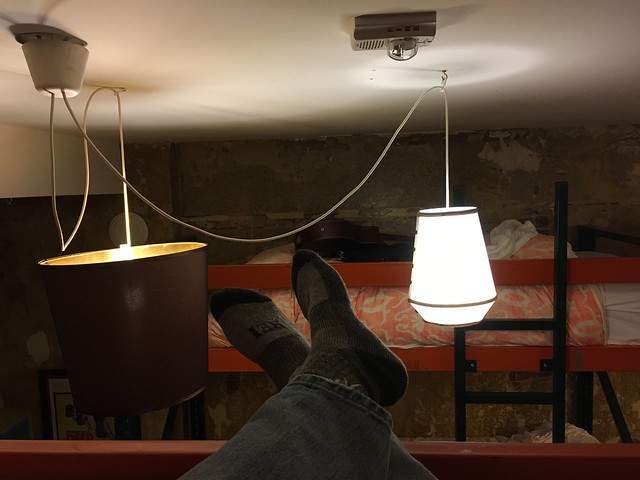 Since I am in Colorado you’d think that I am referring to smoking pot, but no, last night I slept on the third level of a “bunk bed” (aka “commercial storage rack”) at Hostel Fish in downtown Denver. Oh the things I will do to save a few dollars.

I was not pleased being this high.

Planes, Trains, And Buses?
Yesterday I flew to Denver.

Yesterday I took a train from DIA to downtown.

If all goes to plan post-hash I will be riding from Winter Park to Fort Collins in a car, and will only have to use “public” transportation once again to get from Fort Collins to Denver when I am scheduled to return to Atlanta.

Until tomorrow friends. Have a great day.

9 Responses to Greetings From Denver