An interesting day was had by yours truly yesterday.

Novel Worthy
Oh Greyhound, you are a treasure trove of novel characters.

My time spent at the Denver Greyhound bus terminal convinced me that bus travel is not meant for me. I think that most people looked at me as if I were an undercover cop. Maybe that was because I was wearing a Coverville t-shirt?

Thankfully the bus was only half-filled, meaning I had no seat companion. Unfortunately the power outlets and wifi advertised never worked for me. I was also thankful that Winter Park was the first stop, at a curbside, after only two hours of travel. Shockingly I was the only patron to get off the bus at Winter Park. Of course the baggage loader incorrectly put my bag with all the others so I had to get deep into the belly of the bus to extract my duffel bag.

Before heading to the hotel I ate lunch, a hamburger and fries all covered with a chili made from hatch chilis, and two Colorado beers. 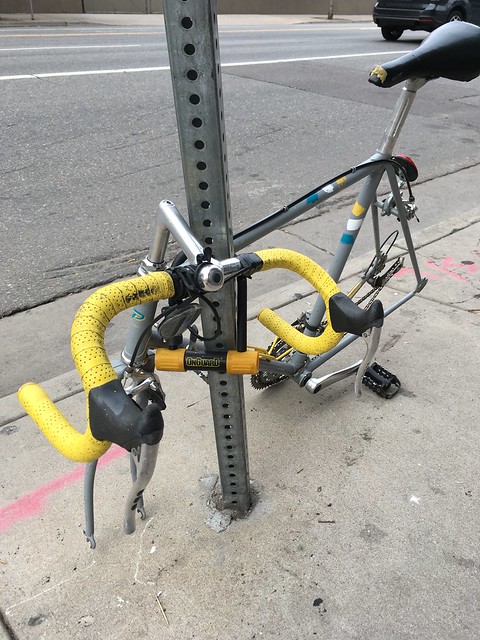 As I walked to the bus terminal I saw this bike, at least what remains of it, outside of my hostel. Obviously I was staying in a good neighborhood.

“Whoa, What Does It Mean?” (Winter Park, Colorado, United States) 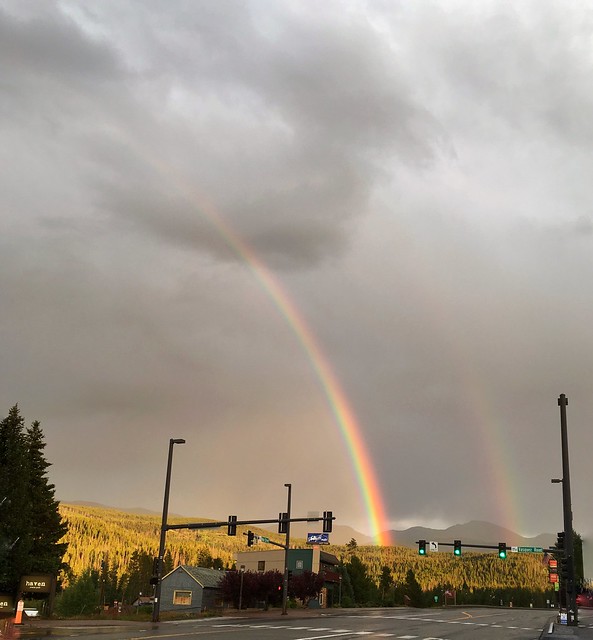 My photo really doesn’t do justice to the brilliance of this rainbow.

Bus Or Walk
Winter Park has no Uber, nor Lyft, nor taxis! My two remaining choices for getting to the hotel were to walk or try and figure out how to ride the free shuttle offered. Given the beautiful weather and the lunch I described above, I chose the former.

According to Google Maps it was a one-mile walk. It was also slightly uphill, at high altitude.

I know, I am leading a rough life.

Just The Three Of Us
Yesterday there were but three of us who had arrived at the lodge. One guy I only saw very briefly, and the other I sat and chatted with for hours prior to going to dinner with him. It was as I got off the bus going to dinner that I snapped the rainbow photo.

ITP-Reader Barb and Allan have yet to arrive at the time of this writing (Thursday, 9:00pm MDT).

It’s hard to imagine that this 32-room lodge will be crawling with hashers in a mere 24 hours. It’s been so peaceful up to this point.

If I can get up early enough I will go outside and try and snap a few extra shots for today’s, or perhaps Monday’s, blog.

Yes, there will be a blog post on Monday. Have a wonderful three-day weekend friends!

3 Responses to Hello From Winter Park