I’m loving the traveling life.
I’m also loving the responsibility-free life.
I’m not loving watching my bank account plummet, but I have a plan to put spending corrections in place upon my return to Atlanta.

Weekend In Raleigh
It’s been a fun weekend up here in Raleigh. Yes, I am still here.

I arrived on Friday as Randy and Cooper were heading out for a two-day camping trip, leaving Lisa and Nolan to entertain me. And then on Friday Nolan went to a sleepover, leaving just Lisa and me. We wound up meeting Lisa’s and Randy’s friends Gordon and Beth, both of who I’ve met previously, out for dinner and drinks. After dinner Lisa and I went to a dessert joint to have one more drink and a piece of gluten-free cake. We were back at the house by 10:00pm and passed out on the couch — each of us seated on opposite ends of the couch — after awhile. Big partiers! Lisa went to bed and I pulled out the bed from the sofa; with no children in the house we slept until 8:00am Saturday.

On Saturday we walked the dog and picked up Nolan from his sleepover. From there we returned to their house, ate lunch, and then drove out to Cary for WUNC’s 40th Birthday Party featuring Chatham County Line. At the venue we met up with some of Lisa’s and Randy’s friends, all hashers I’ve now met now a half-dozen times, and hung out with them. It was a hot, but very fun event. Upon returning to the house we ordered pizza in and watched television. I think I was asleep before 10:00pm again.

Yesterday Lisa, Nolan, and I went to a bar and watched the Packers game. Randy and Cooper returned from their trip and the five of us had a relaxing dinner at the house.

My iPhone has now been infected with PokÃ©mon GO, not that I know how to play. 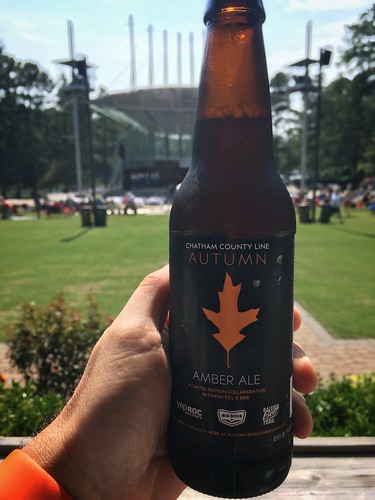 On Saturday I saw Chatham County Line perform (again) in Cary, North Carolina. In conjunction with their latest album release “Autumn” the band has partnered with Big Boss Brewing to release a beer of the same name.

Perhaps My Only Downfall
I joined a Yahoo! NFL Pick’em Group. I was set to celebrate the potential of beating my fellow players when the Colts’s defense decided to go to sleep, costing me 11 confidence points. Combine this loss with the losses by the Saints and Falcons and my chance of winning this week went to nil. Oh well, you pays your money you takes your chances. I’ll try again next week.

One More Night In Raleigh
With no office to be in (at this time) I am staying one more night in Raleigh before I return to Atlanta on Tuesday. Hell, I have to do laundry again at some time… I probably want to mow my lawn again too before heading back out of town on Thursday.

Yo Ho Ho, a traveler’s life for me!

6 Responses to Weekend In Raleigh