I’m blogging from Hennessy Mazda this morning, the M6 is in for its (late) 25k mile maintenance. Hennessy has wifi, so I am using my laptop this morning.

Some Who Wander Are Lost
I left Raleigh around 8:30am yesterday. Full of (misguided) confidence I took too many wrong turns and side streets on my way to 440 in order to avoid traffic an head south. On many occasions I have taken the back roads to and from Raleigh so I was sure that I would remember where I was supposed to turn. This certainty lasted until I took a most unusual S-turn, one that I was certain I had never encountered before. Google Maps confirmed that where I was on US 1 was way off my intended course. Fortunately US 1 eventually intersects with I-20, so I knew that I was okay.

My drive along US 1 took me through many small South Carolina towns, and I chuckled as they all reminded me of the small towns in Iowa that I visited two months ago.

Eventually I wound my way to I-20 and was back inside the perimeter by 3:30pm. All in all an eight-hour drive, especially as one as serene as I had taken, was a good day. 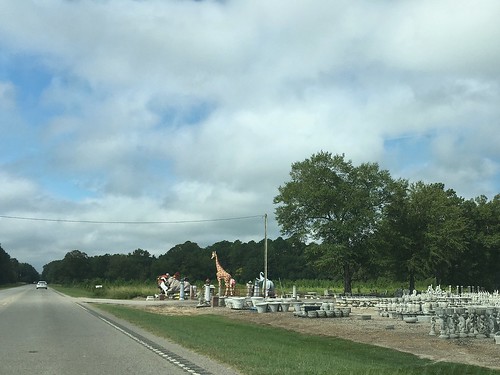 There were so many new-to-me sights along my drive home yesterday. I took this shot from the M6, clearly I was too busy to stop to take a proper photo.

Another shot that I skipped entirely was the “No Street Performers” sign that I saw posted on a Mission Store. Seriously, except for the highway there were no streets nearby on which a “street performer” could “perform”.

New Roads, New Lavanderia
Continuing my role as the busiest unemployed person alive I had limited time to do laundry yesterday. Because of this I chose to do something I swore that I never would do — visit the Moreland Av laundromat near the ITP Estate.

The four positive reviews on Google convinced me to give this lavanderia a shot, but the severely distressed conditions of the machines convinced me that this lavenderia will only be used in emergency situations. My clothes are clean, but one t-shirt seems to have to have suffered. I need to buy more Simple Green to see If I can salvage it.

Long time readers of this space know that I would not do such a thing without good reason. The reason I punished my body so was because it was the first part of the punishment associated with my Yahoo! Pick’em Pool loss. Still owed are a $5 bill and listening to a pop song of the other player’s choosing.

ITP-Reader Stacy, remember the days we used to but on The Amazing Race and the loser had to add a song to his/her iTunes library?