Step One: Get Out Of Bed

Sabbatical is turning me into a sloth. Actually, I think yesterday’s sloth-like day is a direct result of a wonderfully eventful weekend.

Much Like Most Of Atlanta I Was Out Of Gas
I left the ITP Estate twice yesterday. The first escape was to eat lunch and then go grocery shopping. However, after a satisfying lunch at Elmyriachi in Kirkwood I decided to return home to rest. “Rest” turned into a two-hour nap. Ah, the sabbatical life…

With legs still hurting from Sunday’s ride I nixed the idea of driving to North Atlanta for the Monday night recovery ride. About a half hour later I made plans with Hank to meet him at the Lucky’s Burger & Brew in Emory Village to watch a little Monday Night Football. I tried to buy some gas for the M6 at the QT on Briarcliff at Clifton before meeting Hank, but they were completely out of gas. I know about the pipeline break and soaring gas prices (greedy fuckers), are stations running out of gas across the city? 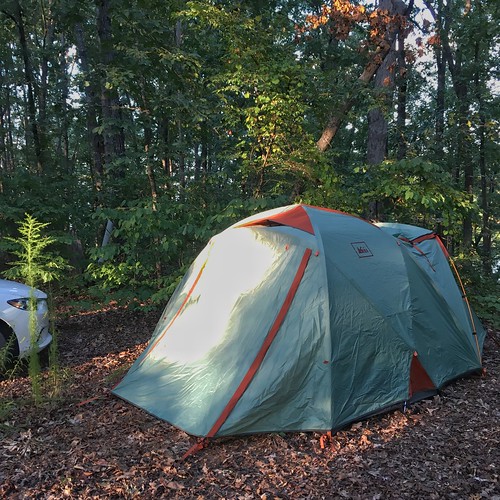 Up in Hartwell I set up tent early, picking a space I’ve taken in years passed. You can see from the image that I was not too far from the M6 either — camping as I like it best.

Paulie Don’t Valet
I don’t like valet parking. Believe it or not many moons ago this opinion was the cause of strife in a relationship of mine.

Naturally I was disappointed to not find a parking space in Emory Village on North Decatur and even more disappointed when I went to park in a parking lot behind Lucky’s only to find it is now completely reserved for valet parking thanks to the new Double Zero restaurant that has opened. Double Zero shuttered its Sandy Springs location (in the old Good Ol’ Days location?) opting for Emory Village instead. After driving around, you know there aren’t many streets with parking near Emory Village, eventually lucking into a space near the Barnes & Nobel a block away from Lucky’s.

With parking secured I joined Hank at the bar and watched the Mets lose to the Braves (DANGEN!) and the first half of the Eagles v. Bears game, for which I picked incorrectly (DOUBLE DANGEN!). At least the beer was good even if Lucky’s has raised their prices slightly (TRIPLE DANGEN!).

Have a great day friends.

9 Responses to Step One: Get Out Of Bed