Because in a lot of ways I am…

Hurting Since Running
Remember that one time I ran last week? I’ve had some pain in my body since. It may not help that I’ve also been fighting off some sickness since Tuesday either, but this may mean a trip to my doctor in the near future — before my healthcare goes away.

If I can get the doctor to check out the bump that has remained on my eyelid since the eye swelled in the Spring I can get two-for-one deal. Heck, if I can figure out a way to hurt myself again before seeing her I can score a rare three-for-one visit!

Given that I am learning Apple’s newest programming language, Swift, I completed an obligatory “Hello World” app, as well as a rudimentary app that does a simply calculation. Baby steps. Today I will continue on my Swift-learning journey.

Today I will also make my first draft of the German homework I need to do this week — write a paragraph in German about the behaviors that constitute a “typical” man and “typical” woman. To me the theme of this chapter is a strange one to be teaching someone who has immigrated to Germany, our books are the official books used by Goethe, but it’s what we are learning. 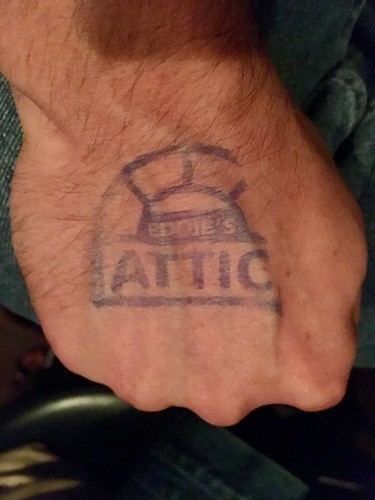 Last might I attended “Blues for Justice” at Eddie’s Attic. Because the person responsible for getting me into the show couldn’t arrive before 8:15pm, the band started playing at 7:30pm, I decided to sit at the outside bar and cut-up with the staff while drinking. I misjudged how long the band was going to play and only heard their final two songs after going into inside. For what it’s worth I did enjoy the songs I heard.

Prior to going into Eddie’s I walked around the square a bit. Since I wasn’t feeling my best, I decided to head to Java Monkeys for a couple of cups of coffee to perk me up. While sitting outside drinking my coffee I was even able to PokÃ© a few Mons; seriously, I didn’t even have to get out of my chair to do so.

Let’s Hope I Don’t Get Blocked In Again
Today I will be going to meet up for lunch with some friends with whom I used to work. Let’s hope that I don’t have a replay of last week’s police activity which blocked me in. Maybe I will be a little smarter this week and park in such a way that makes it virtually impossible to get blocked in.

Can You Feel It?
I say “October 8th.”
You say “Huh? What’s October 8th?”
I say “It’s International ‘Inside The Perimeter Day’!”

Tomorrow, October 8th, marks the twelfth anniversary of my first blog post. Back then I was posting to Blogspot and cross posting to LiveJournal. Strange, right? And they said it wouldn’t last…

To celebrate I may be attending Porchfest in Oakhurst, potentially going to use my ticket for “Thurgood” at Theatrical Outfit, and definitely packing up the M6 for a Sunday drive to the west coast of Florida to visit my mother. It appears as is Hurricane Matthew has spared her portion of the state, and with any luck I won’t have too much difficulty driving to her house on Sunday.

And on Monday I will start it all over again for Year 13.

Have a great weekend, friends.