What’s That Definition Of ‘Insanity’?

Oh yeah, doing the same thing over and expecting different results. I must be insane.

That’s “Mr. Chauffeur” To You
In what may be some sort of record my mother was in and out of her doctor’s appointment in fewer than ten minutes, and this was after hey took her in five minutes early! This completely destroyed my whole idea of how the morning would go.

With newly-found time on our hands we:
– went to the bowling alley for breakfast.
– went to The Medicine Shoppe to fill her prescription.
– went to Publix to get the necessary items for the night’s card game.
– went to KFC to place the order that we’d be picking up four hours later.

And I then four hours later:
– returned to The Medicine Shoppe to purchase a heating pad for her back.
– returned to KFC to pick up chicken for the night (and then some).

The evening was a barrel of laughs as my mother, three aunts, one uncle, and I played two-penny-ante poker. Uncertain of how much change I started with, I didn’t count, I believe I finished the night ahead.

ITP Flickr Pic
“We May Have A Merry Christmas, But It Was A Lousy Day Of Bingo For Me” (Dunedin, Florida, United States) 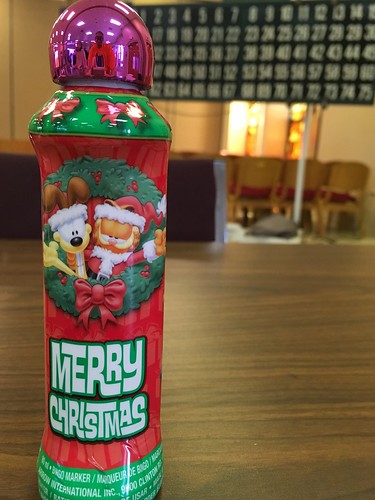 And Yet I’ll Try Again Tonight
Growing up I always used to hear “If at first you don’t succeed p, try, try again”. It is with that adage that I will be taking my mother to bingo again tonight. Hopefully this time I will be luckier than just being the target of cougars. Yeah, roll that concept around in your brain for a moment.

But before I do this I will be going out for another thirty-miles on the bike this morning. I am going to ride the same course as I did on Monday, hoping that I do it a little better today.

Unfortunately it has become apparent that I won’t be making it to any of the area’s breweries on this trip. I will have to settle for stopping at the local package store and stocking up prior to my return to being inside the perimeter tomorrow.

4 Responses to What’s That Definition Of ‘Insanity’?