I find it impossible to believe that I’ve used that title twice before.

37 At 15
I went out for what I had intended to be a stress-relieving bike ride to Stone Mountain, leaving at around 9:30am. The first thing I noticed was how hot it was for this late in the year. Good golly Miss Molly!

I struggled with traffic lights, seemingly getting caught at each and every one.
I discovered that my Wahoo Fitness TICKR heart rate monitor was no longer working (late last night I found a fresh battery and it is working again).
I struggled with the amount of traffic on the roads.
I realized that I forgot to change my Wahoo Fitness app’s category from “Run” to “Cycle”, so my entire ride was recorded as a run (boy do I run fast when I run on a bicycle!).

And to combat all of this I took the “wrong way” ’round the mountain, read “counter-clockwise”. I could have used that short but steep, climb in the park’s outer loop for Vermont training…

I thought that I was moving at a fairly reasonable rate of speed until I did the calculation to see that after two hours I had only covered thirty miles, for a paltry 15 mph average speed. I probably could have used a second heart and a third lung during portions of the ride as well.

My ride took me about two hours, thirty minutes, and at the end I was wiped out. I was finished at 12pm, didn’t get in the shower until nearly 1pm, and didn’t leave the house again until 4pm and that was to eat an early dinner since all I ate for lunch was handfuls of almonds with a 32oz Gatorade. As I recovered it took immense concentration to not move my legs in a fashion that would encourage cramping.

07/07/2016
The other day I mentioned picking up a bottle of Alpine Beer Company Duet IPA at Hop City on the west side. I “rewarded” myself last night by drinking the 22-ounce bottle only to see “Best By: 07-July-2016” imprinted on the label as I poured out the remainder of the bottle into my glass. I guess it never dawned on my that any beer would hang around Hop City long enough to exceed its “Best By” date. 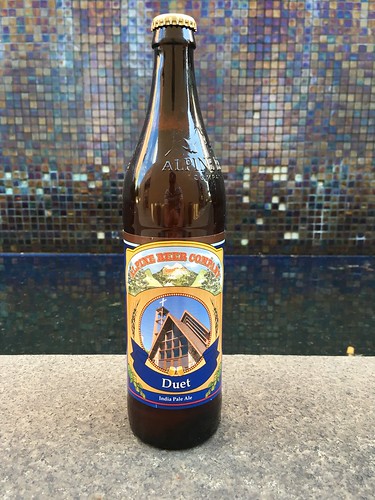 This is a photo of the Alpine Beer Company’s Duet IPA that I purchased at Hop City. Not only did I want to document my purchase, I thought the colors on the label played well with the colors on the wall of the fountain.

$405
I pay a lot of money to insure the M6. This is the price I pay quarterly for being a male (even though I am over 50), single, living in a “high crime” area, and having previously made claims against my insurance. I’ve looked into alternative sources of insurance, none of which are much cheaper. Looks as if I really will have to get a job again. Dangen!

6 Responses to By The Numbers