I’m having feelings from my past that I am not enjoying. Happy Friday? I will try…

Slow Poke
My run yesterday was better than the last one, but that’s not saying much. Again I was able to lumber about a mile and then cover the next 3.5 miles using a mixture of walking (70%) and running (30%). At least did something, right? Oh, and the weather was fantastic!

I will continue to attempt to run for awhile, hopefully getting better at some point. I have no delusions of being the runner I was fifteen years ago, but it would be nice to set out in the future and be able to cover 5k without stopping.

Underaged And Underdressed
I went to the High Museum of Art yesterday to join a docent-led tour of Thomas Struth’s photography that is currently on display there. It continues to amaze me that I can still be one of the youngest (at 51?) and most casually dressed people at these events. Okay, I rarely dress up so that part doesn’t amaze me.

As is the case with most photography I see in museums it was good, but did not blow me away. 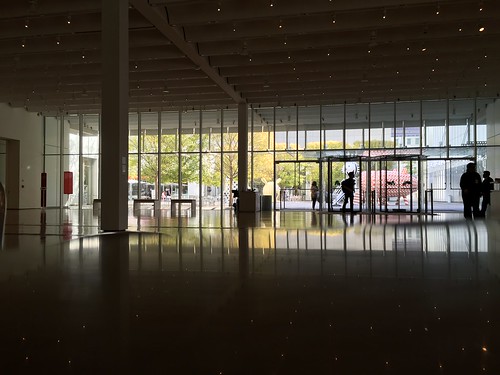 Taken as I waited for the others participating in the tour to arrive.

Then One Of The Oldest
It’s that time of the month again! This morning I am going to Creative Mornings Atlanta to hear a short presentation. This month’s theme is “Transparency”. Instead of being one of the youngest in the crowd for these events I am usually one of the oldest.

It’s funny, I was once interviewed by a woman I admire greatly about what it means to be a creative person. At the time, just a few months ago, I felt creative but today I am not so sure. However, I won’t let this stop me from eating a free breakfast this morning. Hey, I’m unemployed! 😉

Am I Ready For Some Football?
The World’s Largest Outdoor Cocktail Party is tomorrow. I am interested to see which Florida Gator team arrives.

On Sunday I will be attending the Packers v. Falcons game along with the Raleigh Royalty who are driving down for the game. Let the record reflect that I was not the one who ruined the surprise that they had in store for their boys because I was able to keep the secret. Prior to the game I am going to attempt to “tailgate” at Elliott Street Deli & Pub. The weather should be fantastic, I only hope that they’ve not shut the air conditioning off for the winter inside the Georgia Dome.

Have a great weekend everyone!

9 Responses to All Too Familiar