Things in my life went south last week, except for my weight which seemingly is headed northbound again due to a lack of consistent exercise. So starting today, Halloween, I am vowing to improve myself.

Yeah I know, you’ve heard this all before…

The Plan
Since I’ve yet to hear back about the interview I had last Monday I am going to use my day-to-day unemployed life to do the following:

Six-to-eight hours of dedicated work/improvement is not to much to ask, hell that used to be my norm.

My plan was almost interrupted by a trip to Ireland that I was looking into over the weekend. The deal sounded too good to be true, and sure enough when I clicked the link in the email the website claimed that the deal was no longer offered. Typical bait-and-switch tactics.

Football Good, Football Bad
Good: Florida beat Georgia again!
Bad: Apparently there really is no “D” in “Packers” since they couldn’t stop the Falcons in order to win the game.

Your mileage may vary. 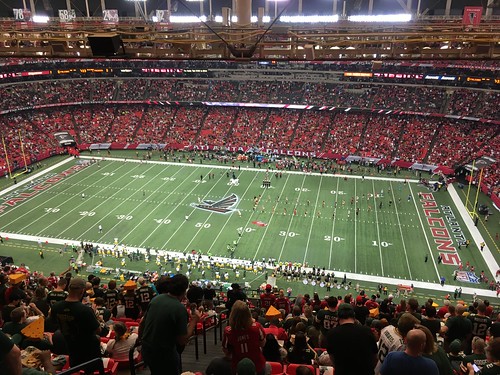 Much like with Turner Field a six weeks ago I paid my final visit to the Georgia Dome this past weekend. “But what if Florida plays in the SEC Championship Game?” Heh, I’m not going to spend good money to watch them get their asses handed to them by Alabama.

“Almost As High As One Can Be” (Atlanta, Georgia, United States) 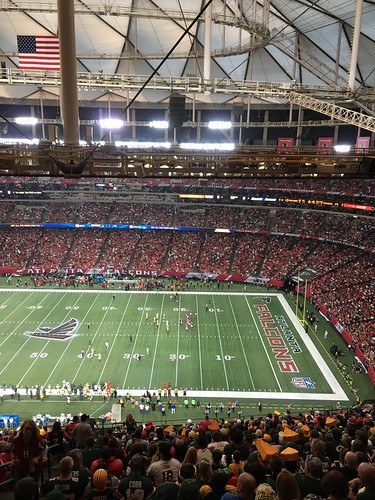 Boy howdy were we up there!

There were many empty seats yesterday, which is what gives Atlanta its reputation as being a bad sports town. And though I know it’s hard to tell from my photos, there were many Packers fans in attendance.

Even though the team for whom I was rooting didn’t win I had a great time hanging with the Raleigh Royalty this weekend. Yesterday we used the beautiful weather to our advantage by MARTAing downtown early, walking around Centennial Olympic Park, doing some of the Fan Experience outside the Dome, and partying a bit over at Elliott Street Deli & Pub.

The Rest Since Friday
On Friday morning I went to Creative Mornings Atlanta before wandering around the High Museum of Art for awhile.

From midtown I drove all the way out to Norcross to meet some friends with whom I used to work for lunch. I had time out in Norcross so I kicked around downtown Norcross for a bit.

I signed up for COBRA health insurance continuation on Friday. It’s not cheap, that’s for sure, but it’s a lot cheaper than paying for everything out of pocket. Now I can schedule a physical and colonoscopy (both of which should have been done by now), as well as go to my eye doctor in December.

On Friday afternoon I met friends for drinks at Benchwarmer’s, and after that we drove to Peachtree Corners (yikes!) for a fantastic dinner at an Asian Gastropub called Ba Bellies.

On Saturday afternoon the Raleigh Royalty made it into town and we met up in Tucker at The Local 7, my first trip to that establishment. We only noshed on appetizers with our drinks, but I wouldn’t be opposed to stopping in again if ever I find myself out in Tucker.

And there you have it! Hope your weekend was wonderful.