Rumbling And Stumbling
Yesterday’s plan went off with only a few missteps.

Lunch was good, not great. To be fair Pollo NorteÃ±o’s offerings will never be Michelin Star quality, but I enjoy them. Per my agenda I walked to the lavanderia and proceeded to do all of my laundry, the first such effort since the Thursday before leaving for LEAF two weeks ago.

I drove the M6 down to Town Brookhaven and then went into LA Fitness, yes my membership is still active; this is where the day’s hiccups occurred. First, at some point I took out the padlock that I used to store in my gym bag. Had I been going to the gym even occasionally I either would have never let this happen, or I would have noticed this earlier. It wasn’t much of an issue because I had stored all of my valuables in a cubbyhole locker with a combination. The run/walk was tough, slow, and once again consisted of too much walking; however, I managed to go out for 5.2 miles. Apparently it’s near-impossible to start running again when you are an fat, old man. The most embarrassing part of this day occurred when I couldn’t open the cubbyhole locker containing my valuables and had to ask the front desk to use their master key; this happened twice yesterday. Each time I was certain that I new the number I had set because they were both significant numbers in my life, however both times I failed. Ugh. To make matters worse, the woman who helped me both times locked and unlocked the same locker, while I was standing there, with no problem. Double ugh.

Shamed, I left LA Fitness and walked down to Costco. To my surprise I ran into Hank who was also wandering the aisles of Costco. We each did our shopping quickly, and then walked up to Lucky’s Burger & Brew where I proceeded to ingest some of the calories I had expended.

After a stop at KroBar to pick up some Talenti gelato I was home in time to watch Game 7. Around the fifth inning I was so tired that I turned off the tv and went into the bedroom. It wasn’t until I awoke around 2am that I found out what I missed. The Cubs? World Series Champs? Huh, maybe there is hope that I will have sex again after all.. 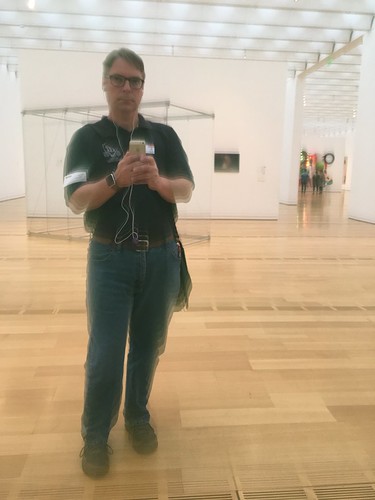 Pardon the pun but I felt as if I were reflecting on my life when I took this photo last Friday. You can see the name sticker I put on for Creative Mornings on my left arm, and the other sticker is the High Museum’s.

Movie Sign!
In addition to my daily routine, some parts of which are going better than others, I will be driving to Sandy Springs this afternoon. Wait, what?!? That’s right, I will be driving to Sandy Springs to the Sandy Springs Lefont Theater to see “A Man Called Ove”. I have read the book (wait, what?!?) and now want to see the movie interpretation. I will be seeing the 2:20pm showing (saving $1.50 on the ticket price), flying solo this time (unlike when I went to see “Hell or High Water”), and with a two-hour running time will have a little while to kill before going over to ITP-Reader Barb’s house (which means I will be able to avoid some traffic).

I’m so looking forward to eating some spicy Tasty China, drinking a few beers, and hanging out with friends.