Yesterday was turning out to be a slow, unproductive, day. Sure I was eating a ton of leftovers but other than doing some kitchen cleaning I wasn’t getting much done.

As I sat on my bed watching a video podcast around 1:00pm I glanced at my Apple Watch and saw that it was 61Â° F outside. I just had to get out and enjoy the day! I hopped onto my mountain bike and, after returning back to the house to pick up a light cycling jacket, I went out for a brilliant ninety-minute journey.

I rode through Grant Park and over to Turner Field:

(This is a panorama that you can see better by clicking on it and going to Flickr. By the time you read this I may have uploaded a few more shots I took around the field formerly known as the home of the Braves.)

I joked with one of the women who was working at Turner Field. “Uh oh, it looks like someone stole one of your statues.” I said. “Oh no, we’ve already moved some.” she replied. Obviously she didn’t get my attempt at humor.

I rode up to, and then by, The Georgia State Capitol: 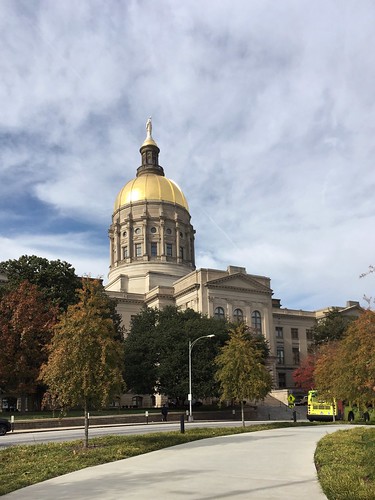 I wound my way around Georgia State and then headed east and north. I made it over to Krog Street Market and rode some of the belt line, jumping off at Freedom Parkway.

As I rode the path of Freedom Parkway I picked up marks of a hash of yore (actually I think I saw my first hash arrow when I was closer to Georgia State). Much as I do when I am actually running/riding a hash I managed to lose trail, this time in a parking lot inside Candler Park. I searched for marks briefly and then gave up.

From Candler Park I managed to ride to Clifton Road, where I proceeded south and made a beeline back to East Atlanta.

In all I rode about ninety-minutes and covered almost fourteen miles! YAY ME!

What Are We Going To Do Today, Brain?
Same thing we do every day, Pinky…

Actually today I am going to attempt to get some Swift learning done. Rumor has it that the Raleigh Royalty will be rolling into town at some point in the day. If so I shall be headed over to Tucker, or whatever the neighborhood in which Sani is currently living is called for a little pre-Thanksgiving celebration.

I’m also going to try and follow ITP-Reader Barb’s advice in regard to buying a new non-stick frying pan by going to Tuesday Morning, TJ Maxx, and/or Ross. It’s not that I think people will be snatching up all of the frying pans for Christmas gifts, but I really don’t want to be a part of Christmas-time shopping if I don’t have to be.

Given that it’s been many years since I’ve gone to the end of the half-marathon, and many more since I was fit enough to run the half marathon, there should be a blog post tomorrow. Come back and find out, won’t you?