One more month of 2016. Let’s get this shit over with and try to make 2017 wonderful (assuming it will be possible with the person who will be taking over the reins, or is that reign, of our country). Apparently the new month and chillier morning temperatures inspired me to do no more than stay in bed today.

The $20 Lunch, Gas Not Included
I drove up to some place known as “Peachtree Corners” for lunch yesterday. Okay, to be fair I’ve been there before; I’ve even been to this restaurant.

The reason I drove all that way was to meet up with former coworkers for lunch at Kool Runnings, obviously a Jamaican restaurant. As I do when I eat Jamaican I ordered oxtail. I went large, as this was to be my one “big” meal of the day, by ordering the $16.99 platter. All in all I spent over $20 for lunch. It was like I was employed again! Was the meal worth the price? No, but it was amazingly tasty.

I took no photo of my meal for fear of retribution. What? Well, you see I’d have to post the photo to Instagram and it would be seen by my friend Darren, who is Jamaican. Darren is currently spending time in Miami, and if I know him he would have posted a photo of a lovely looking person wearing a bikini. I don’t think my heart could have taken that hit, especially after eating oxtail. 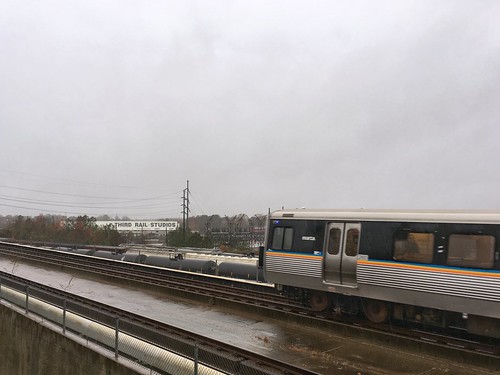 (I wish that I could have pulled out more detail in the sky, but it was really that gray)
Apparently I drove right through the tornado warning area on my way back ITP from Peachtree Corners. The rain was torrential, and my phone issued a National Weather System warning on the drive.

Afraid of tornadoes, as well as car-damaging hail, I made it to the Doraville MARTA station and pulled into their parking garage. Was I “safe”? Not really, but safer than I would have been otherwise.

Want to know the worst place to wait out a tornado warning? A train station. Why? Because you know what is always described as the sound of an oncoming train? A tornado.

Okay, it wasn’t that bad. And, I got a photo for today’s blog.

Hockey Stick Economics
I GET IT! I live in a city that has pissed away two, yes two, NHL teams! And because I live in this hellscape I am unable to walk into a big box sporting goods store, honestly I think Dick’s is the only one left, and purchase a hockey stick.

But why would I want to do such a thing? Am I swatting squirrels? Do I need an extended-handle backscratcher? No, I intend to play hockey, street hockey!

When I was at Revolution Doughnuts the other day I saw a poster for Atlanta Street Hockey, a rag-tag bunch of people who play twice a week. They play goalie-free pickup games on foot (which is good because old men like me don’t belong on skates), and the best thing is that they play at Walker Park which is about a mile from the ITP Estate!

The problems? It’s been about forty years since I’ve owned any hockey gear. Yesterday I stopped in to two Dick’s locations, no luck. And then I remembered Play It Again Sports. For $9 I picked up a (unfortunately right-handed) stick. If I decide that I want to pursue this sport more I’ll look into getting a left-handed stick, as well as some protection for my hands and shins. Given the popularity of lacrosse I should be able to find these items fairly easily.

ITP Movie Night
After waiting out the weather I popped into the Chamblee Public library for a while. I did some Swift programming and checked out two movies — Chef, Her.

I watched “Chef” last night; I must be on some sort of Scarlett Johansson kick. Nope, I wouldn’t, she has tattoos… Anyway I agree with the masses who score “Chef” as 7.3 out of 10.0. The movie was good, but nothing spectacular.

ITP Christmas Card Night
Since I’ve received my first Christmas card of the season (thanks ITP-Reader Stacy!) I will be spending tonight at home drinking up a storm, the only storm I hope to see today, listening to some cranked up Christmas carols, and writing out my Christmas cards.

Yes, the “Cheers” is back! I retired it through the end of November because frankly I wasn’t feeling very cheery. This is my attempt to rectify this.