Today is the “Three Kings” issue.

Friday night I fell asleep while watching A Year Without A Santa Claus.

Last night it was Santa Claus Is Comin’ To Town.

Each time I slept for about 20 minutes, somewhere in the middle of the show. Perhaps I should be the King of Naps!

ITP Flickr Pic From The Archives
2008: “All I Want For Christmas Is For Santa To Give Me Back To Mommy” (Atlanta, Georgia, United States) 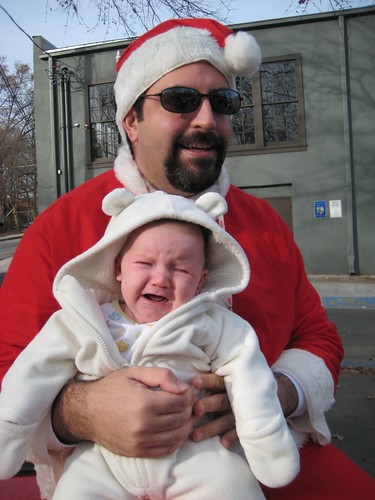 When all was right in the world the Atlanta Hash used to hold its annual Christmas Pub Crawl in East Atlanta. This year it was held in the Decatur area. Fuck you, 2016! 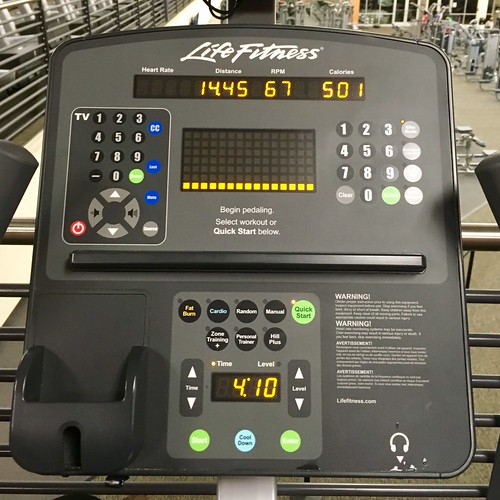 I went to a strange place yesterday. I understand that in some languages it’s called a “gym”; this one was called “LA Fitness”.

I Am (Not) The King Of Cycling
While I spent my hour pedaling the stationary cycle depicted above I listened to a highly-entertaining “The Forward” Podcast with Lance Armstrong in which Lance interviewed Bo Jackson. I know many people really dislike Lance for various reasons, but I don’t count myself as one of them.

Toward the end of the interview the two discussed Bo’s now-annual bike ride in Alabama called Bo Bikes Bama, which I was surprised to hear was a five-day ride back in 2012 (!). Bo Bikes Bama is now a one-day ride in Auburn (yuck! but makes sense) and next year will be held on Saturday, April 29th, 2017.

According to Jackson the money raised, after expenses, goes toward building community tornado shelters in Alabama.

My first thought was “Oh great, that’s the same weekend as the BRAG Spring TuneUp ride. Figures!” But I was glad to see that I was wrong when I looked at my calendar to find the Spring TuneUp ride is to be held the prior weekend.

Guess who has already secured a hotel room in Auburn for the nights of April 28th and 29th. Moi! I’d also be registered for the ride if registration had been open yesterday; I’ve given them an email address to notify me when registration opens.

I Am The King Of Bingo
I wasn’t sure that I wanted to go to Lucky’s Burger & Brew in Emory Village last night. There were two other options that sounded good — a German mixer at some German Society of which I had never heard, and a special evening of beer at The Midway Pub. However, repetition is king in my life and I’ve already spent the money for gift cards at Lucky’s (and gotten a 20% return on my investment!) so Lucky’s it was.

I didn’t even expect there to be Bar Bingo last night, but the guy said that their hiatus starts after next Monday’s show; I guess the beer drinking affects my memory?

Hank and I sat at the bar, as we do, and bantered with the bartenders, as we do, waiting for our number to be called, as we do. After stating how he never wins, Hank won the penultimate game last night and in the process picked up $10 gift card. I was going to be stymied again?!?! It all came down to the final “cover all” game… I sat waiting on one number, B-4, for at least five balls — and then it was called! Triumphantly I walked to the caller, only to be followed by two stragglers who finally realized that they too had BINGO. Ba! Humbug! However, all was once again right in the world when my 33% chance of winning came true when the tie-breaker ball was an “N”, as I claimed it would be. For my efforts I won another $20 gift card, and if I understand their system correctly I am now qualified for the Spring Bingo Big Game.