This should be the Spinal Tap Edition since this one goes to eleven, but alas I have no special Spinal Tap tie-ins below.

This morning I am listening to what could be considered a (northern) polar opposite of the music depicted in This Is Spinal Tap, The Vince Guaraldi Trio’s soundtrack to “A Charlie Brown Christmas”.

Meine Deutsche Klasse Ist Beendet
Last night was the final class of this session of German classes. Man, where does the time go? When the next session begins I’ll be looking for a job. In-con-ceivable! Oops, wrong movie…

As I’ve been known to do dinner last night was food from Tin Drum. Last night I had my usual, Tin Drum Chicken, but opted for a complete bed of spinach instead of rice and spinach; because you know, it’s the rice, and not the fried chicken nor sweet peanut sauce, that makes me fat. Of course in German class I proceeded to eat German sweets all night long; because you know, I skipped the rice! However, I have to say that I didn’t miss the rice one bit, so I may be opting for this configuration again the next time I order this dish.

Before class I got to see some midtown mommies prop their spawn on the laps ersatz Santa and Mrs Claus who were reading stories inside Colony Square. Bitter? No, not bitter at all. Why do you ask? 😉

It somewhat amuses/disappoints me that the first German session for which I had no competing time suck (read “work”) I felt as if I had my worst session. Did I not study enough? Probably. Is the content getting harder (as it should)? Definitely. Am I going to quit? Nope! Or I should type — Nein!

I Need To Increase Circulation
No, not of this blog, of the blood circulating to my legs. In the past week, perhaps in conjunction with the colder weather (?), my hips and legs have been bothering me. It may be that I am sitting/sleeping too much (duh!) and that I need to get more exercise (my waistline would certainly agree to this) or it may mean that I am getting old. Regardless I don’t like it, I don’t like it one bit! 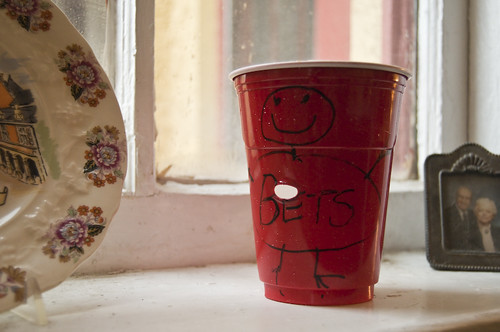 The white spot seen in this Solo cup is a hole which occurred when the drink was placed too close to a candle. Oopsie!

Back in the olden days Christmas meant “Drinksmas” — being single, going over to Betsy’s apartment/house, eating brunch food, drinking early (and all day/night), eating dinner, and rocking out to YouTube videos. You kids today, with your loved-ones and happy families, you don’t realize just how good you have it!!! Now get off my lawn! 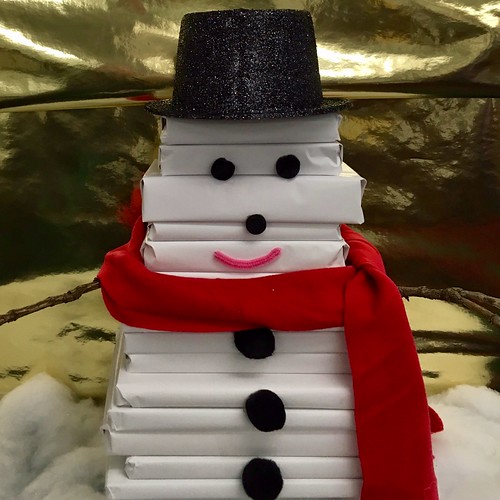 There are few things in my cold, dark world that increase the size of my Grinch-like heart. When I walked into the Decatur Public Library on Monday and saw this “snow” man made out of wrapped books I actually smiled. There is nothing new in the world, only things that are new-to-me, and this is one of those.

Finally
I made it through an entire Christmas Special last night without falling asleep! Admittedly it was A Charlie Brown Christmas, which has a runtime of 25 minutes. If you want a good laugh read all of the “goofs” reported for “A Charlie Brown Christmas”. Nerds! (btw- the continuity error when the sign on Lucy’s psychiatrist stand changes between “THE DOCTOR IS IN” and “THE DOCTOR IS REAL IN” bothers me to no end. FFS! The sign doesn’t even keep its same location between scene changes!)

Here’s an interesting point. Sometime during the viewing last night I realized that a lot of what I consider to be desirable in a girl/woman was imprinted by Patty, no not Peppermint Patty, this Patty:

This Patty was introduced in 1950, so she’s a bit old for me. Oh man, I need a psychiatrist, and preferably one whose sign doesn’t keep moving around! Looks like I picked the wrong day to stop sniffing glue. Damn, again that’s the wrong movie…

After watching “A Charlie Brown Christmas” I (re)watched, and napped partially through (hey, I started watching it around 10:30pm), American Hardcore. I was not one of those slam dancing in clubs in the early 1980s, but old man Paulie wishes he had been. Well, that’s as close to a Spinal Tap tie-in as I can make today, so I should probably wrap this up.

Oh wait, tonight I am making a return to Terminal West for tonight’s Chatham County Line Electric Holiday Tour show. I considered going to Terminal West after German class last night for the Shearwater show, and am a little disappointed that I didn’t, but you just read what I did instead.

Make it a great day friends!