Yesterday was almost a perfect ten of a day, only it wasn’t…

Yes, We Have No Internet
After a very hard and sweaty hour of stationary bike riding at LA Fitness I wandered around the corner and ruined it all by eating lunch at Moe’s. Unlike Monday I decided to eat lunch before going to the Decatur Public Library because I figured that I’d be there for a handful of hours. (side note: this morning I finally got around to putting some granola bars in the M6 so I have a post-workout snack and don’t have to resort to eating out, or stopping somewhere that will provide temptation instead of just buying a snack.)

As I approached the entrance doors I saw the sign “Internet is Out of Service”. DANGEN! I decided to test to see if their internet had come back on and they had yet to take down their sign and I was right — at least for a little while; then it went out for good. Because I was there to do some Swift studying which required an internet connection I packed up my stuff and headed toward the door. But first, I swung by the DVD section of the library and picked up a couple of new titles for me to watch — Avengers Confidential – Black Widow and Punisher, and Meru – Believe in the Impossible. I see from IMDB that the former of these two titles only scores a 5.8 out of 10; perhaps it will go back to the library sight unseen. The latter of these two titles was suggested to me by an old woman who asked me “Are you open to the possibility to watching a mountain climbing movie?” Who isn’t?

I returned home to finish my Swift studies, only I didn’t… 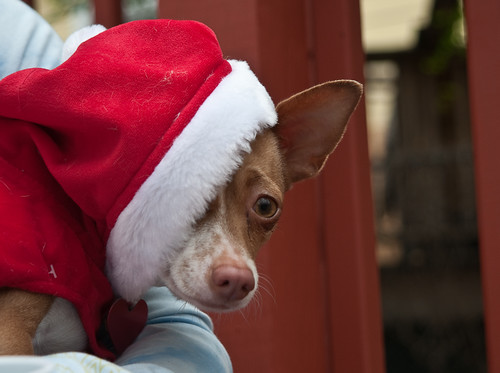 Another from the days of Drinksmas. This is Martha’s dog Nibbles in a Santa hat. 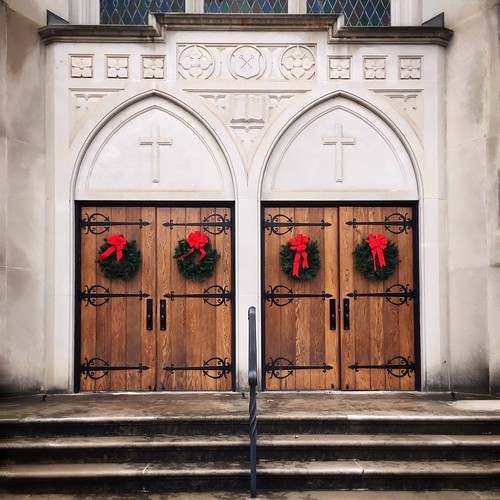 While I was walking to get a package of nuts for lunch on Monday I noticed the Christmas wreaths on the church doors. You know, churches are really good at decorating for Christmas. Well, at least the Christian ones are. 😉

And In The End I Had No Holiday Spirit
In yesterday’s blog I mentioned going to Terminal West for the Chatham County Line show, only I didn’t…

As the time grew nearer for me to leave for the show I decided that I didn’t feel like going out. Instead, I stayed at home and watched The Martian, yet another DVD that I have checked out from the library. Having read the book last year I knew the complete story going in, and while I certainly enjoyed the book more than the movie, I did enjoy watching the movie.

More Nights At Home! More Nights At Home!
Merry Christmas to me! Yesterday Amazon had the Mel Brooks Collection Blu-Ray set on sale for $19. $19 for the following movies:
Disc 1: The Twelve Chairs
Disc 2: Blazing Saddles
Disc 3: Young Frankenstein
Disc 4: Silent Movie
Disc 5: High Anxiety
Disc 6: History of the World – Part 1
Disc 7: To Be or Not to Be
Disc 8: Spaceballs
Disc 9: Robin Hood: Men in Tights

Normally I’m not one for owning movies, but just look at those titles! That’s a little more than $2 per movie! Sure, that’s $2 more than if these were available from the library, but $2 per movie is also cheaper than DVDs sold at Goodwill. Soon they all be mine, well, once they arrive on my doorstep and assuming that no one takes them from said doorstep before I do when they arrive.

Make it a great day friends.