Fed Up
I got a bit fed up with things yesterday.

First, I decided to just go ahead and buy a new backup battery for my alarm system. At the same time I also ordered a new battery for a UPS that’s been laying around for awhile. Disappointed that the Batteries+Bulbs on Moreland Avenue is still in the works, I placed an online order to pick up my purchase at the store located in Shamrock Plaza on North Druid Hills.

Having to go to a store to pick up the batteries turned out to be a good thing as well. The clerk asked me “Is this battery going into an alarm system?” to which I naturally answered “Yes”. He then proceeded to tell me that I ordered the wrong battery because apparently the terminals on the one I picked from their website were too wide and then sold me the proper battery at the same cost. Sure enough the battery he sold me works perfectly with my alarm panel. 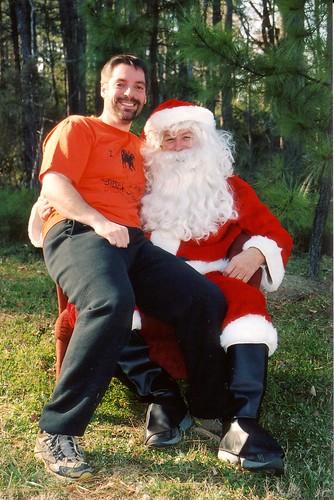 Back in the days when I had gotten larger again, but still used to hash. 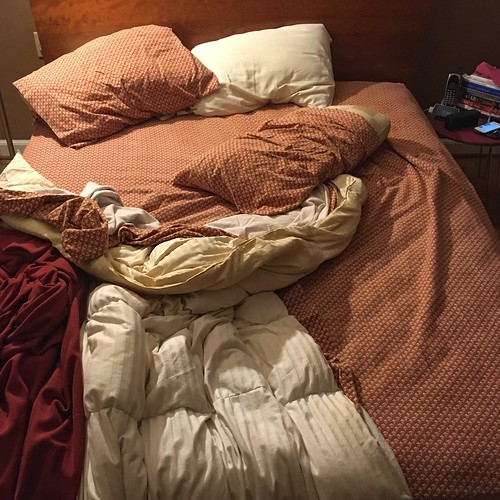 This was the condition of my bed the other morning. Can you say “Slept like shit?”, I knew you could.

Fun Night Of “Top Chef”
I cooked a pan-load of comfort food last night, Baked Chicken and Rice with Black Beans. I have to admit that mine didn’t look much like the photo, in part because I think that I was supposed to rinse the can of black beans, and I did not. Also, when/if I make this again I am going to use less cheese (I know, heresy) because the amount of cheese overwhelmed the other flavors a bit. However, the meal was good to eat on a chilly winter night.

Here’s the thing to be wary about this recipe however. It is advertised as a “one-dish” meal, that is not true! The first instruction is “Prepare rice according to package directions.” which requires a pot. One of the ingredients is cooked chicken, so you will have to use a pan to cook the chicken. Another of the instructions is to sautÃ© the vegetables as well. And finally you mix all of these things into the casserole dish in which you bake it.

In a wonderfully-effective insulated casserole traveling case I took the food over to Betsy’s where we watched the two most recent episodes of Top Chef.

The Video Hit List
Here are the the videos that I’d like to watch before midnight of December 26th.

Elf
It’s A Wonderful Life
How The Grinch Stole Christmas (the tv show, not the movie)
National Lampoon’s Christmas Vacation