Okay, I will stop after today. 😉

Pre-Christmas Celebrating
It was a lot of fun hanging out and bowling on Saturday night. Many thanks to ITP-Reader Barb and Allan for hosting, and congratulations to ITP-Reader Steve for bowling the best game of the evening.

It’s a good thing my dieting doesn’t start until next week because I ate a near literal ton of fried food on Saturday night.

Flummoxed By Google/YouTube
For some reason I am unable to leave comments on YouTube. I’m logged into YouTube using my GMail account, but every time I try to “create a channel” in order to comment I get an error saying “Are you sure you’ve entered your name correctly?”. What? I am trying to create this channel using the nickname you see in this blog, as well as my real last name. If Google/YouTube can’t handle this, which they apparently cannot, I will give up trying to leave comments.

Hangovers Do Not Get Easier With Practice
Ouch.
Shhh, not so loud please.

Yesterday I had an early dinner followed by way too much red wine at my friend Dave’s house. The four of us who assembled knocked off much more than any of us expected. Hey, it was Christmas.

ITP-Reader Ronnie, by the time you called I was too far gone to converse.

Not surprisingly my head hurts this morning.

Oh, and I met another Trump supporter, bringing the total number of people who I’ve met who openly told me they were going to (and now have now) voted for that man who I cannot stand, to three.

I hope that you had a lovely day.

ITP Flickr Pic From The Archives
For my final “Archives” performance I will give you two, count’em two, pics!

You haven’t realized this but I’ve been opening up these past three days. This photo, as well as the two that I showed at the end of last week used to be marked as “private” in my Flickr feed. 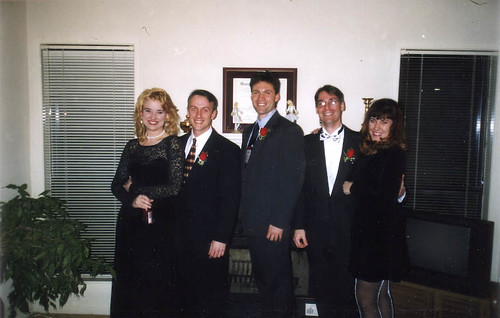 This was prior to the Company Christmas Party 1995. I was a mere thirty years old, and at that time I weighed in at about 180. The woman to my left was, after that night, to become one of my few girlfriends. Just a few weeks earlier she told me that she was interested in dating me (I am as bad as recognizing this today as I was then…). I adored her. After six months of dating I was deemed “not flashy enough”, her words, and dismissed from service. I was crushed, and still had to work with her on a daily basis. You know where all those sayings like “Don’t meet your honey where you make your money.”, “Don’t dip your pen in the company ink.”, etc. come from? Experience. For those of you who know my history, or think that you do, this was the reason I quit that job in 1996. I needed to get away. Quitting there led to my being hired at Media4, the company which was purchased by Echostar in 1999. And 19.5 years later I quit that job for entirely different reasons.

As Paul Harvey used to say — “And now you know the rest of the story.”. 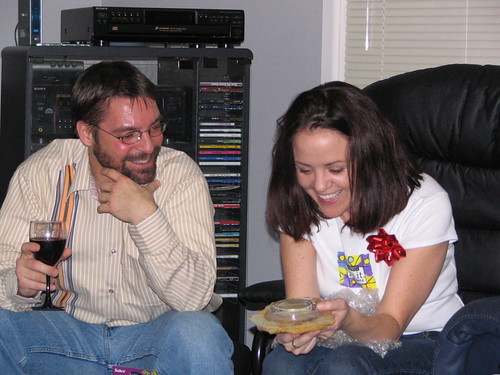 During a White Elephant Christmas swap ITP-Reader Stacy (pictured right, obviously) picked a gift. In my best Charlie Brown voice I said “I got a rock”, and lo and behold she did!

Hair Of The Dog
I am supposed to meet Betsy at The Elder Tree Public House for “Boxing Day” soccer viewing. I’m not much of a soccer fan, but when I agreed to go I thought that it might be fun to get out of the house and I wasn’t expecting to be hungover. We’ll see how this goes…