An Unprecedented Amount Of Sleep

Not sure what got into me last night / this morning, but at 9:37am I am finally getting up. Sure, I was awake a few times during the night but I am finally feeling rested enough to move on. I wish that I were inspired to go to LA Fitness…

An Expensive Lunch
I like Ponce City Market. Even though I was overwhelmed with Mailchimp’s office space I might even like to work there, you know, and raise their average age considerably. However, I would certainly not be able to eat lunch inside Ponce City Market often.

An aside: Where does Atlanta make all of its money. Even when I had a well-paying job I never felt comfortable spending the kind of cash I see others spending. They must have much more than I do.

Regardless, Hank, Joe, and I met up at former Top Chef Cheftestant Hector Santiago’s restaurant El Super Pan. Don’t bother clicking on the link, you will only see this today. 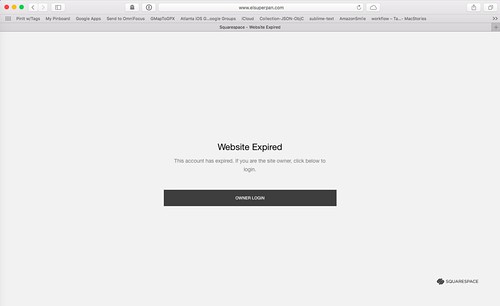 I was going to complain about the $20 I spent for a sandwich, side of Salvadorian cole slaw, and a “Mexican” Coke, but apparently they aren’t even making enough money to keep their website alive.

Ready To Change In 2017
For nine months I have been saddled with this lump on my eyelid. It has gotten worse over time so yesterday after lunch I made an appointment at Eye Physicians & Surgeons on Scott Boulevard. The receptionist at their counter told me I had last been there two years ago, and set me up with an appointment on January 3rd with the same doctor. Hopefully things will go smoothly, as everyone else seems to ensure that it will.

Nothing Else To Say
That’s all I have for today. The week between Christmas and New Year’s is always kinda a dead week for me, let the tradition continue!

7 Responses to An Unprecedented Amount Of Sleep