Last night I was going to get out of the house (for the first time since Friday?) and planned to meet up with a friend and former coworker at DBA Barbecue, and upon confirmation was going to send my friend and former boss Hank an invite to join us. While I was on the trainer yesterday I received a text telling me that my friend was still sick, recovering from the flu, and he regretted not being able to make it.

After finishing on the trainer and cleaning up I sent Hank a text asking him if he wanted to meet up at Lucky’s Burger and Brew, this way we could spend some of the money on our purchased gift cards and perhaps play a little bar bingo.

As I was readying to leave the house I got a call from Hank. “Hey, I was looking up Lucky’s address to send to my nephew so that he could join us and Google says that it’s permanently closed. I tried calling them and the phone just rang and rang.” Having just seen Fox Bros BBQ say on Twitter that someone erroneously declared their location permanently closed while they were closed for a week to perform renovations, I nearly uttered “In-con-CEIVABLE!”.

And then I saw this on the door of Lucky’s: 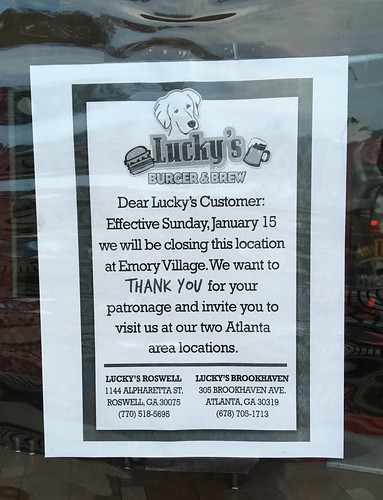 Now I will have to make the drive up to the Brookhaven location to use up the balances remaining on the gift cards. Looks as if someone will be doing some Costco shopping and working out at LA Fitness in the process.

Busy Busy
More German studying and computer programming needs to occur today, as in I need to start right now…

Have a great day, friends.