If the Trump and all of his cronies can make up news, I’m going to start making up words. Hence, today’s title is “Strugglation”, or the feeling of struggling in one’s life. Wait a minute! I’ve used “dangen” for years and that’s not a real English word either. Perhaps I’m just a round peg trying to fit into a square hole, which happens to be the second definition of “strugglation”.

Awash With Doubt
All weekend I waffled on my decision to let someone come over today to install a new security system. On the one hand I am looking forward to having a new system, one that uses a cellular network (for which I pay monthly of course) instead of a landline (of which I am hoping to rid myself). However it’s not as cheap as I’d hoped, and there is a three-year contract. Am I really going to be here three more years?

Beware Of The Ides Of March
On Saturday I received a summons for jury duty. DANGEN!!! My appearance day is in mid-March, which if I can manage to land a job soon should be about the time I start at my new company. Now isn’t that the most inconvenient time to skip work? It’s not like the county could have called me during the seven months that I have been on hiatus. At least I am not planning to be out of town during the time at which I am to report.

Because I Could
I have been working out regularly and yesterday saw me put in a good hour at LA Fitness. Afterward I wanted to sit outside in the beautiful weather and remembered that I had cycled past a restaurant in Kirkwood called The Greater Good BBQ. Upon hearing that they had but one rack of baby back ribs remaining, which may not be true and I am apparently quite a sucker for a hard sell, I ordered a half rack for a (very) early dinner. 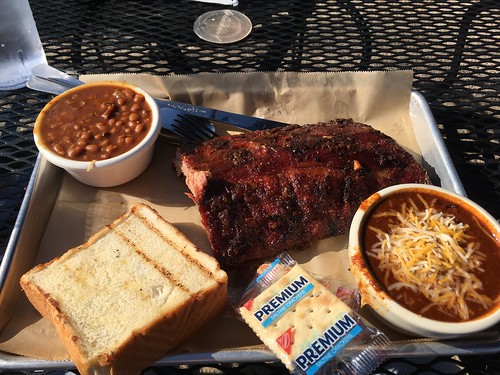 Pictured above are my ribs, a bowl of baked beans (upper left), Texas toast (lower left), and brisket chili (lower right). Not pictured are the two SweetWater 420s (SweetWater just celebrated their 20th birthday!) that I also consumed. Everything I ate was delicious, though I thought the chili could used a few more chunks of brisket. Though the meal was expensive, especially when you drink two beers, it did momentarily help lift me out of a funk.

If You Can’t Say Anything Nice
That’s about all I will say about the play I saw on Saturday night. Hey, at least I wasn’t one of the people who left at intermission…

Gone, But Not Forgotten
I took two boxes of “things” to Goodwill yesterday. I must be continually executing this chore until all my extraneous shit is gone.

If It’s No Longer A Tube Is It Still The “Boob Tube”?
I watched a lot of things this weekend. Well, not many varied things but I spent a lot of time in my tv room.

After this weekend I have watched the entirety of the first six seasons of Parks and Recreation. I will admit to missing the show when I finish the final season, which it appears takes place in 2017 even though the series really ended in 2015.

Last night I watched Birdman or (The Unexpected Virtue of Ignorance). Suffice to say that this movie was nothing of what I expected. I am still trying to figure out of I liked it or not…

Ifs, Ands, Or Butts
If the installer gets here early enough, and the company I am trying to get an interview calls me, I will be putting my butt on my mountain bike and going out for a ride this afternoon. The goal will be to cycle over to the Decatur Public Library to return “Birdman” and then satisfy my requirements for exercising today. I realize that the library will be closed today, but I can still drop the video into the book drop. However, in order to exercise this plan so many things have to fall into place…