No, I’m not selling the ITP Estate and going for a condominium (at least not yet).

Going Kondo
This weekend will be about getting rid of things from the ITP Estate (note to self: don’t get rid of board games which may be worth some money). I am going to attempt a modified version of the “KonMari” method for getting rid of things as described in the book The Life Changing Magic Of Tidying Up written by Marie Kondo. Kondo, a woman obsessed with tidying and minimalism professes to touch each item and keep only those that spark joy. There hasn’t been a whole lot of joy sparked in the ITP Estate in a long time, perhaps this will help me considerably clean out this place.

To help matters there is an Electronics Recycling Day in East Atlanta tomorrow. I plan to bring a bag-load of electronics up there, either on foot if the weather is still okay, or by car if rain is happening. Question: Can someone explain to me why recycling centers will take computer monitors for free, but charge to recycle televisions (including flatscreen televisions)?

Guilt Free Netflix And Chilling
Note: My use of “Netflix and chilling” is in the literal sense, not the way the kids use it today.

With the pressure of the interview behind me I allowed myself to decompress on the couch and watch hours of Netflix. It felt great.

Quick Wrap About Yesterday
I thought it went well. If I don’t get an offer for this job I don’t know what’s going on, and will seriously consider moving to get out of the Atlanta market. The waiting has begun.

Miscellanea
Today I will be returning to LA Fitness for the first time in a week. Yikes!

I took a picture yesterday while eating at The Majestic Diner: 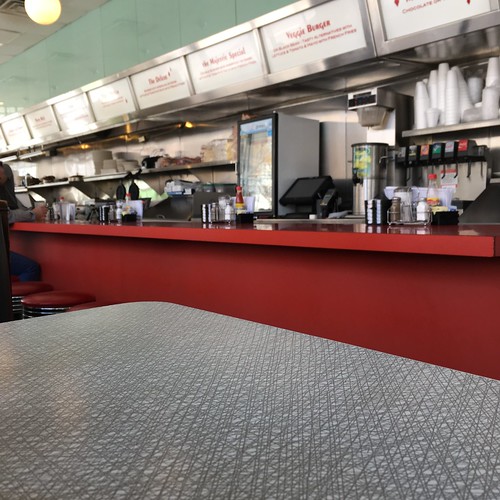 A gift card for credit card rewards points I redeemed is now three days late. If this doesn’t arrive in the mail today I am going to have to find out how to get the company to send me a new one. What a hassle.

Another $20 Amex gift card arrived in the mail the other day. You are correct in assuming that I will be using it before the administration fees start eating away at its balance.

I am in the market for a region-free/multi-region DVD player because I want to watch German movies. Have any suggestions?

Yesterday I finished listening to John Cleese’s autobiography. As you would expect it was an entertaining listen.

I am frustrated with the number of people who don’t understand the difference between Standard Time (ST) and Daylight Saving Time (DT) when noting the time of an event. The lack of detail is either getting greater, or I am just being exposed to it more.

I have a $5 bet on tonight’s basketball game between the Gators and Badgers with the eldest son of the Raleigh Royalty. The bet was his suggestion. I won’t be watching the game because tip-off is at 9:59 PM EDT. If I win I will take his money, and then buy the boys something with it like cotton candy or snow cones.

The Batteries+ And More on Moreland Avenue has opened. I am very pleased for this and I am not sure why.

Apparently Publix, and no stores south of Ponce is the only place I can purchase Twinings Decaffeinated Irish Breakfast Blend tea. Who would have guessed that?

Holy crap, a McSweeney’s Quarterly is on its way? I signed up for a year’s worth of McSweeney’s almost two years ago but have never received my first volume. Why? Because they haven’t published on in that long! McSweeney’s has been going through the process of becoming a non-profit instead.

Something in my backyard was unhappy with me opening the kitchen door at 10:30 last night. It was far too dark to see anything but I could hear something waddling away. My guess is that it was an opossum as I’ve seen one (or a few different ones) near my house in the recent past.