An Unprepared Return To German Class

Tonight I start German B1.4 and I am wondering where the last two weeks during which I was going to study daily in preparation for tonight have gone. At least I’ve gotten a lot of other things done, right?

Derailed Going Through My Books
Yesterday I started the KonMari method on my books. You’d think that this would be a very easy process because all I needed to decide is whether or not I truly thought that the book in question will be of use to me in the future, but it was not.

In one of the books I found a Father’s Day card, obviously not written to me, when it fell out of the sleeve of the book. In another book I found this message about which I had forgotten: 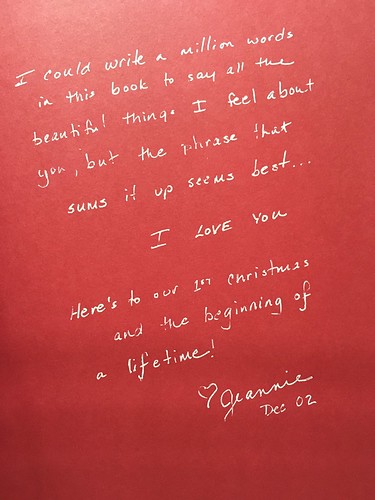 Given that this was our only Christmas together, she was unfortunately wrong about this.

I’ll attempt to go through my books again today.

I have to say that this house cleaning has been a cathartic experience for me. Today is trash day for my street so by tomorrow I will have an empty recycling bin that I will start filling again.

Baseball Is Back
While doing my chores yesterday I listened to the Mets game through the MLB app. Oh, they beat the Braves. Listening to a day game on the “radio” was a great way to spend my day. I actually attempted to listen to the game on a real radio, well, my ancient Rio Cali mp3 player that has and FM tuner in it, but failed. One of the humorous things that happened when I went to use the mp3 player was that it had a technology podcast on it, from 2005!

My Blog As My Memory
Over the weekend I watched one of the newly-released comedy special from Dave Chappelle on Netflix. At the end of the episode I started thinking back trying to recall if I ever saw Chappelle perform back in the olden days. I remember going to The Tabernacle for a comedy show with my friends Stacy and Andy. I remember Stacy being pregnant and wearing a t-shirt that said “It’s not mine” on it. I remember having second-row seats. But I remember nothing about the performance.

My lack of long-term memory is not a new revelation for me. See also: the nearly fifteen-year-old note I found in the book yesterday.

However thanks to this space I was able to find out that I blogged about seeing Chappelle on June 19th, 2006.

Make it a great Tuesday, at least we know the weather in Atlanta will cooperate today…

25 Responses to An Unprepared Return To German Class