I’m keeping this short today because it’s my last day of “freedom”. Also, things related to this space will change drastically next week; I may not be able to blog as routinely, and I certainly won’t be commenting and responding to comments as thoroughly as I have. Such is the life of a new employee I suppose.

Half Day Of Awesome, Half Day Of Sleep
I was a machine for awhile yesterday. With the exception of going to LA Fitness I did everything else on my early agenda.

I had an enjoyable lunch at OK Cafe with ITP Readers Barb, Steve, and John. As you can see from this photo I opted for a healthy lunch: 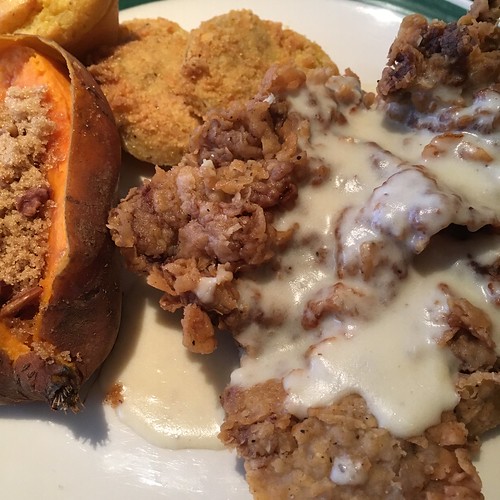 as long as your definition of healthy follows in line with Ivanka Trump’s definition of “complicit”. I ate the chicken fried steak, fried green tomatoes, a baked sweet potato, and a corn muffin. It will come as no surprise that I wasn’t very hungry last night.

From lunch I dropped off Steve at his office and then fought my way to the lavanderia in Chamblee.

Once done with laundry I drove down to Brookhaven where I went to Costco. In cleaning out my briefcase recently I found nearly $30 in Costco money, which I promptly spent on Gatorade, cranberry juice, fig bars, and cans of chicken breasts.

My desire for productivity ended in Costco. It was around 3:30pm and I decided to drive straight home to avoid as much traffic as I could.

Upon returning home I started watching Netflix and promptly fell asleep for a few hours.

You’d think that a multi-hour sleep during the afternoon would make it impossible for me to go to sleep, and you would be partially correct. I finally gave in at 12:30am.

On My Last Day
Shortly I will be headed to Kroger to buy some groceries for a dinner that I will be making tonight. I will be taking this dinner over to Betsy’s to hang out with her and Gary, and hopefully finally watch the final episode of Top Chef.

Rumor has it that I will be riding the Tony Serrano ride tomorrow. I’m not thrilled about how cold it will be tomorrow morning however. If I intend to ride tomorrow I need to get the bike off the trainer and tune it up for a ride.

Rumor also has it that I will be riding on Sunday, this time with Urban Explorers of Atlanta on their “Battle of Atlanta” tour. This is the tour that literally rides down my street! The only downer that has occurred with this ride is that the agenda has changed so that lunch is now a picnic in Grant Park. Though I’ve picnicked often as part of dates, I’m not a fan of picnics, especially if I have to carry my lunch on a bike for a few hours beforehand. I may just opt out of the picnic portion and do my own thing. We’ll see.

Okay, that’s all the time I can budget for today. I will attempted to write a blog on Sunday night so that you will have something to read during my first day at “XYZ Corp” on Monday.

Have a great weekend all.

30 Responses to The Last Hurrah