It’s rare when I am not the first one to arrive at a meetup.

Early is on time
On time is late

So I was especially pleased to see that though I was arriving at The Imperial thirty minutes prior to the schedule meeting time I was pulling into the parking lot right behind ITP-Reader Stacy. ðŸ™‚ðŸ‘ðŸ»ðŸ™‚ It was a further pleasant surprise to hobble around to the patio and see Intermittent-ITP-Reader Claire ðŸ˜› and Darryl already holding a table.

The “Pimento Cheese Smash Burger” at The Imperial was really tasty. Here is a photo of one taken and sent to me by Stacy: 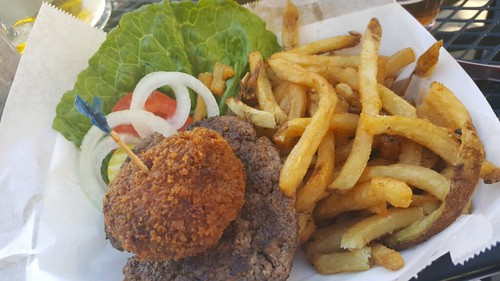 That fried ball of goodness on top was filled with pimento cheese, bacon, green onions, and jalapeÃ±o; to put the “smash” into your burger you placed the bun on top and smashed the fried ball.

After a day of pseudo-exercise and consumption I was ready to go home and fall asleep, and that’s almost what I did. I managed to barely keep my eyes open until 9:30pm.

In an office filled with photos of known athletes and celebrities thanking the PTs, including one who misspelled “Brian” as “Brain”, I was twisted, stretched, and mildly electrocuted in order to get my aged body back to functioning properly, all for the “low, low” price of $120 since I had no script for PT and paid for this out of pocket. The PT couldn’t identify anything technically wrong other than some extreme tightness so I think that I will take the knowledge gained and the rubber strap given to me and self-therapy from here on out.

You know, I find it interesting that when I was checked out by Royster, and at physical therapy yesterday, my body really never hurt. No matter which way I am contorted I feel okay. However, as soon as I start walking, or by day’s end, my body hurts. It’s kinda like taking your car to a mechanic and not being able to have it reproduce a sound it was making I suppose.

Back to The Imperial for a moment… A funny thing happened while seated there, I saw the founder of the Urban Explorers of Atlanta, you know the group I was riding with when I tumbled, walk into the restaurant. Of course I hold only myself respufor my injury but I wanted to hobble up and say hello, but when I went inside I could not find him. Apparently he wanted to eat, but it was too crowded, and was in the erstwhile I searched for him. Oh well.

Tonight I will be eating another burger, but not as part of Atlanta Burger Week. Tonight I will be meeting up with Hank at the newly-reopened Lucky’s in Emory. From there I shall return home to do some German homework.

Have a fantastic Thursday.