The ‘S’ Stands For ‘Stubborn’

Many years ago now when Apple introduced the iPhone 3GS Steve Jobs stated on stage that “the ‘S’ stands for ‘Speed'”.

Were it legal, or at least in fashion, in the mid-1960s to give your newborn the middle name of “Stubborn” then I should have received that honor. It would have been fitting, but didn’t happen.

Bo Knows Shortcutting, I Do Not
If you follow me on other social media you know what I did on Saturday. I allowed myself to get quite a sunburn on my arms. How? Read on.

First, let me explain that when I committed to doing Bo Bikes Bama I booked a hotel room not more than 2.5 miles from the ride’s start/end with the plan to ride to/from the event. Even in my current state I was hellbent on following through on this. If it hurt too much riding to the ride, I was just going to give up on the idea of participating.

Because I had not received my rider packet in the mail (it was in my mailbox when I arrived home on Sunday) I had to go to the Auburn Arena to get my number, wristband, and t-shirt.

As late as leaving my hotel room on bike I was committed to riding the twenty-mile route at Bo Bikes Bama. Even in my decrepit state, if I could ride I figured that I would be out no more than ninety minutes. Because of this I only took one water bottle, and only put sunblock on the back of my neck.

There were two huge problems with my plan:

So I made a decision to start out with the sixty milers and shortcut my way back to my hotel in the case were I didn’t feel okay. Oops, I should have applied more sunscreen.

For the first time in three weeks I felt nearly painless again! Much like when I rode the trainer last week it was a struggle to get on and off my bike, but I managed. I started with the last group and I was not only keeping up, I was passing people. I finished the sixty-mile route in four hours, forty(ish) minutes, almost thirty minutes of that was spent at rest stops to get fluids, food, and rest.

At the first rest stop I saw Bo Jackson, who along with Lance Armstrong and Brett Favre had taken off with the lead group. He was sitting on the tailgate of a pick up truck, “resting” in his words. About ten minutes later I saw Bo Jackson’s doppelgänger get into a truck and drive off in the direction of the start. I’ll give Bo the benefit of the doubt that he needed to return to the start and welcome the twenty-mile riders. I never saw Lance Armstrong nor Brett Favre, this is too bad since I would have liked to greet both of these guys.

At the second rest stop I believe that a woman hit on me. She, who had a very distinctly-sounding cassette, drafted me for many of the first fifteen miles; as soon as I’d start coasting I heard the cassette, as soon as I started pedaling the cassette noise stopped. At some point the cassette noise passed me and kept going. At the second rest stop she walked up to me and said “Since you were nice enough to let me draft behind you for so long I thought that I should come up and say hello.” It’s a pity that she was not anywhere near my type, though it felt really good to have someone be so polite to me especially on a day on which I was struggling mightily. Just because I was pain free didn’t mean that my cardio and muscles weren’t working overtime to keep me moving, especially on a hot morning. I actually cramped in both legs with ten miles to ride and was fortunate to be able to ride through it to make it to the end. 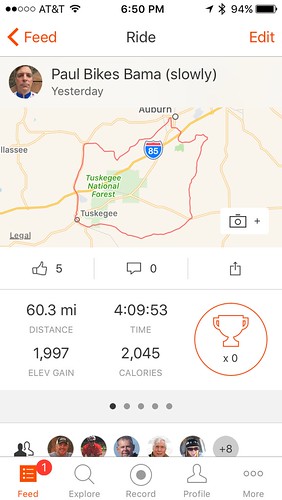 My mileage total for the day was around 65 miles, my legs were screaming by the time I returned to the hotel.

In addition to not taking my second water bottle nor applying an appropriate amount of sunscreen, here are some other things I did wrong due to not being in practice for riding:

It’s almost a miracle that I survived…

I Am Lame
While most of the definitions of the word “lame” are relatable to my current condition, it is definition #2 listed by Merriam-Webster to which I refer:

After riding back to my hotel room, taking a cold soak, a much-needed shower, and then a short recovery nap, I did little else in Auburn.

I finally rallied myself to get out of the air-conditioned room only to eat a very early dinner (I rewarded myself with a Chinese buffet. Hey, don’t judge I burned a lot of calories out there!) and stop at a beer store called “The Kool Keg” where I picked up three six-packs of beer that I cannot buy in Georgia (as far as I know). I spent the remainder of Saturday night in my hotel room watching videos on my iPad (I couldn’t get the TV in the room to work) and going to sleep early. PAR-TAY!

Waffle House Stories
As Waffle House stories go this is lame, but it happened to me so I am blogging it. Why did I go to Waffle House? Well, the advertised 6am breakfast in my hotel was not ready and I was ready to return to Atlanta, so I stopped at Waffle House on my way out of town.

As I sat there awaiting the delivery of my breakfast a guy walked up and sat on the other side of my booth.

Also in this Waffle House were a young college-aged couple; she looked as if she was wearing the dress that she had worn on Saturday night. 😉 Ah, youth…

One Auburn In A Weekend Was Enough For Me
As soon as I saw where Auburn, Georgia was as I looked at the start of yesterday’s Black Sheep Hash from my hotel room in Auburn, Alabama I knew that I would not be going to congratulate Sanitary Not on her 500th Black Sheep.

It also didn’t help waking up yesterday with a wee little bit of hip/leg/knee stiffness and pain, not surprising since I rode my bike for over sixty miles on Saturday. Stubborn is as stubborn does, and I was paying the penalty for my stubbornness.

Stay safe in today’s predicted heavy rainstorms and make it a great Monday.

19 Responses to The ‘S’ Stands For ‘Stubborn’