It was an interesting weekend in my world.

Up North To The West
I awoke early on Saturday morning and drove up to Cartersville to meet my friends who take photos. The plan was to meet at the Chick-fil-A in Cartersville for breakfast before going to see the Ansel Adams exhibit at the Booth Western Art Museum. However, when I discovered Ross Diner in downtown Cartersville I knew that is where I was going to dine instead. I had a massive breakfast of two eggs, country ham, hash browns, and biscuits and gravy. I washed all of that down with a couple of cups of coffee; the bill for this was a mere $11. After breakfast I had time to drive over to Chick-fil-A to meet up with the guys.

After the gents and I left Chick-fil-A we pondered what we would do with the time we had prior to the Booth’s opening. Our question was answered when we lucked into a gaggle of Model T Fords that were part of a car rally and parked outside the Booth because their members were going to the museum as well.

We wandered about the museum for a few hours and decided that we should set out for lunch. After consulting with one of the docents we followed his advice and walked a few blocks to Scott’s Walk-Up Bar-B-Q. Due to my large breakfast I had yet to work up a hunger, but I managed to eat a large pulled pork sandwich regardless. 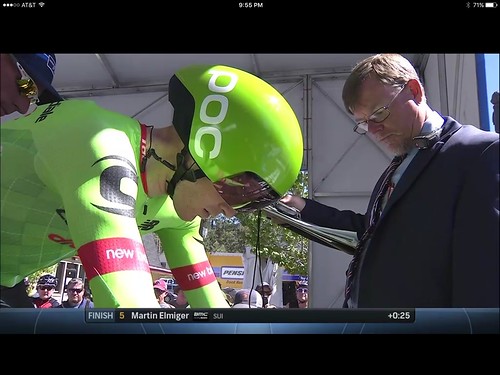 I captured this on my iPad. That’s ITP-Reader Steve getting ready to free Andrew Talansky for his Individual Time Trial ride last Friday at the Amgen Tour of California.

“Reflections Of, The Way Life Used To Be” (Cartersville, Georgia, United States) 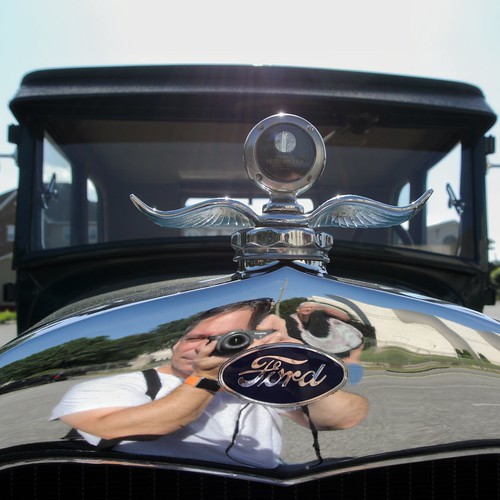 This is the front of one of the Ford Model Ts in the rally.

I am trying to prepare myself for my Germany trip by practicing my mobile photo processing routine. I took photos with my Nikon 1 V1 on Saturday, imported them all onto my iPad Air 2 via a Lightning cable, and did all of my editing using apps on the iPad. I have about thirty-five days to get my shit together for this trip.

Branching Out
In the early evening of Saturday a violent rainstorm rolled through East Atlanta, bringing with it gusts of high wind. The way the trees moved outside reminded me of the tornado that blew by my house in March of 2008. When the storm passed I went outside to find that the top of the dead pine tree as well as one of its larger dead branches had been snapped off, thankfully away from the house. I also discovered that some of the other trees around my house had healthy limbs taken off by the force of the wind. Fortunately no property damage appears to have occurred, though I need to get out into the wilds of my backyard to see where the tree top landed, and to assess all of the debris that has collected in my yard.

When I return from Europe in July I am going to have someone come out and clear the backyard, including taking down the dead pine tree completely as well as many of the other scrub trees that are out there. If they can manage to get a chipper/shredder into the backyard I’ll just have them blow all of the chips and such in to the back corner and use the mulch as needed.

I Managed To Crack The Screen Protector I Bought To Protect A Cracked Screen
Oh my poor iPad Mini 2. Late last year it fell onto the kitchen floor and its screen shattered. I bought a “screen protector”, which I really use as a “finger protector” to keep shards of glass out of them, and have been happily using it again since. A couple of weeks ago I had too much in my hands and allowed the iPad Mini 2 to drop onto one of my wooden floors; I thought this did no damage, however… This weekend I discovered that the second fall put a hairline crack into the screen protector. Dangen!

I wonder if I should buy a screen protector to put onto the screen protector. Nah, until it finally goes belly-up I’ll continue to use this iPad as an around-the-house, content-playing device since it still works pretty well.

Waschsalon Abend
Once again I’ve amassed piles of dirty laundry which need my attention. So after work tonight I’ll be going to the Waschsalon in Midtown. With any luck I will also be going to Torched Hop Brewing for a Monday night burger special.

Hope your weekend was great, and that the fun continues today.