Summer Of Fun: A Call To Action

Though summer won’t officially start for another few weeks, like many others I declare the Tuesday after Memorial Day to be my start of summer. And even though I have already suffered one major setback, and am hoping not to encounter another (mentioned below), I am hoping to make this an enormously fun summer and am asking you to orchestrate/join with me.

Consider The Source
Because of the unfortunate event with a hasher taking her own life a few weeks back Sunday’s Black Sheep had a late start time and was advertised as being “short” so that people could go home and clean up for the karaoke that was to begin at 9pm. As I do, I had talked myself out of going to the hash, but then I was semi-guilted into going by ITP-Reader Barb given that the start was no more than three miles from the ITP Estate.

In the past ten years I have lost most of my running ability, especially the ability to through the woods. It was clear to me that after only a few hundred yards of “running” through a parking lot that I was completely out of shape and that my left hip/knee were not going to be happy to be hashing after being injured eight weeks earlier. Fortunately, this occurred at the start and I was able to walk with Barb, Sanitary, and House of Boobs.

At one time I knew the area behind Value Village and around the landfills well, but I had forgotten how strenuous climbing around, into and out of the Entrenchment Creek, and through swaths of poison-ivy infested woods could be. It didn’t help that I was in tights and a long-sleeved technical shirt, my armor against poison ivy, on a high-eighty-degree and humid day. I was swearing profusely, had brought no water because I heard trail was going to be short, and unfortunately all attempts to cool dow with water crossings failed. It would have been much worse had my hashmates had not been so generous in sharing their water with me. I make no lie when I say that at points on the journey I was hallucinating. Hell, had I seen the snake in the tunnel through which we walked I may have assumed that I was hallucinating then; I walked by it unknowingly and it wasn’t until HoB screamed that I saw what I had missed.

I’d suspect that we, the walkers, were on trail for at least two-and-a-half hours.

By the time I got home, hung the hashing clothes outside to dry, showered vigorously, and sat down to eat dinner in what I was assuming was a low-blood-sugar state, it was past 8:30pm.

The waiting to see if I get attacked by poison ivy has begun. Sadly it feels as if I have the makings of body itching. It’s hard to explain, but I have been here before. I hope that I am wrong. Today I will be investigating to see if my primary care physician takes my new health insurance… 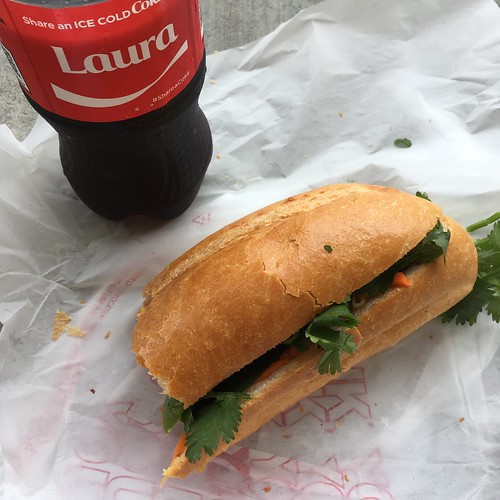 You know that I have a preference for women whose names begin with the letter ‘J’ but as the saying goes, Beggars can’t be choosers. I had a plan to head to Marietta for dinner and a desire to rid my hashing clothes of any poison ivy so I stopped into the lavanderia next to Lee’s Bakery to do a small load of laundry and then treated myself to this for lunch. 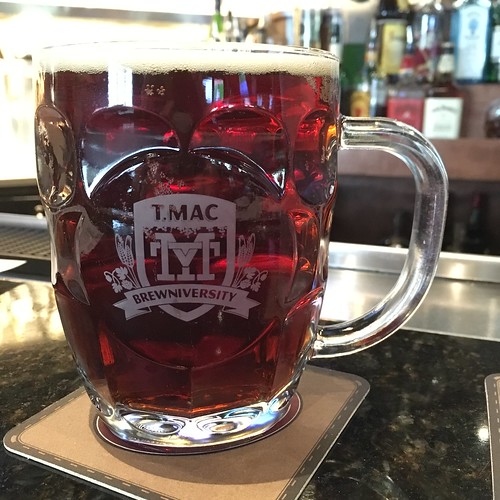 The next stop on my “Oh, The Places I Used To Go” tour was the Perimeter Mall area. No, I didn’t go to the Apple Store, I purchased that iPad Mini 4 from Best Buy on Saturday… No, my target was Target, and then Taco Mac to pick up what I will show in tomorrow’s blog. Of course when you are in Taco Mac you have to have a beer, right?

Nothing Life A Death-Defying Drive
My dinner destination was the Garage Mahal. Seeing the heavy rains slowing traffic on I-285 I thought I could beat the worst of it and cleverly take Old Paper Mill Road from Sandy Springs to Marietta. This was almost as bad of a decision as deciding to hash on Sunday.

The beginnings of flash flooding (I drove through some spots that concerned me).

And finally a downed tree branch that blocked my lane, forcing me to drive in the other lane around a blind curve! Of course a SUV came from the other direction while I was in their lane.

By the time that I got to Terrell Mill I was never so happy to be in Marietta.

Dinner was a lot less dangerous as we sat on the Deck Mahal eating deliciously-cooked ribs and swapped stories like old sailors. My drive home was far less harrowing.

Hope yours is a happy Tuesday. Think about what we all can do this summer. Let’s do this!

15 Responses to Summer Of Fun: A Call To Action