A Little Less Amazing Each Year

Since the onset of Survivor I have been a RealiTV fan. I watched many seasons of it before giving up. I dabbled with Big Brother; it didn’t stick. I was a late comer to The Amazing Race; it’s one of the few shows in the genre that I still watch. I thought this season of TAR was entertaining, but not as “amazing” as in past seasons. I can’t blame the organizers too much however, after nearly thirty “seasons” it seems impossible to find new, and exciting challenges. I found it strange that the final three flew to Chicago and did all of the final activities there, without ever leaving the city.

I won’t spoil the outcome in case you have not had an opportunity to watch.

Good Time With Great Friends
I was fortunate to be invited over to Betsy’s house for an evening of gorging on Tasty China. Betsy was in Marietta to get work done on her car, so she was was able to bring some back to her house to share.

I stopped by Krobar to pick up a couple of bottles of wine, and I also brought over a few boxes of ice cream bars to help soothe the burn of the Szechuan food.

The night was an earlier one than normal for me. I was home by 8:00pm and was able to do a few things, including getting a cat nap, before the 10:00pm start time of TAR.

“Drinking? Yes, Why Do You Ask?” (Atlanta, Georgia, United States) 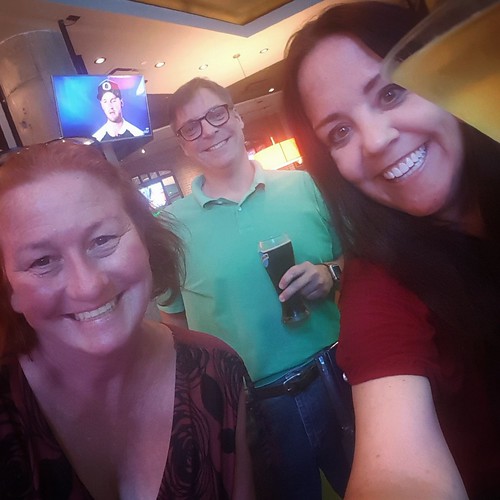 ITP-Readers Claire and Stacy, improving a photo including yours truly. Photo credit to Stacy, who is on the right.

Weekend Summer Of Fun
After work tonight I will be having a beer or two with my friend Hank.

Tomorrow will be a day of yard work and organization.

In addition to getting a haircut on Sunday I will be driving up to Norcross to play in the bingo tournament for which I qualified way back in December when a Hank and I would meet up at Lucky’s in Emory back when they offered bingo.

Before I know it, it will be Monday. Fortunately I already have plans for having fun then.

Have a fantastic weekend!

7 Responses to A Little Less Amazing Each Year