Well, once again I came up empty at the big bingo tournament. I never really got very close to winning all night long. I drove all the way to a Roswell to play and returned home with none of the $2000 handed out. It was sad.

Believe It Or Not, I Got Poison Ivy
Poison ivy stemming from last Sunday’s hash finally surfaced late Friday, early Saturday morning. I happened to notice that the inside of my right knee was itching, and when I looked at it I saw the tell-tale patch of small bubbles. Sunday was the only day that I could have contracted this, and my attempt to kill it early through the use of some leftover Prednisone failed.

At this point I am hoping that it’s weak and will go away on its own so that I won’t have to spend money by going to see a doctor in order to get a prescription for more Prednisone. 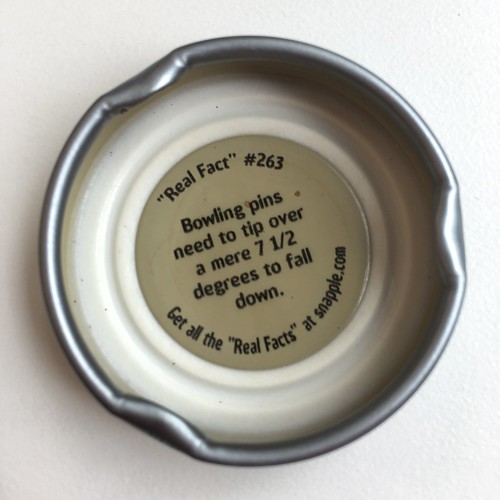 I have been drinking Snapple at “XYZ Corp”. With each bottle you get a “Real Fact” and this one tickled me.

Before The Rain
On Saturday I decided not to ride my bike and went out and mowed the lawn instead. Because it was starting to climb the house I also spent some time pulling some of the English Ivy (there is so much more of this to do).

After mowing I made my first trip into the wilds of my backyard to find the fallen treetop. Finding it was no problem as it was much larger than I imagined. I thought the section that came down was about four-six feet, but in reality it was probably closer to twelve-fifteen feet in length. Yikes! That being said I was glad to see that my assumption that it did no damage to my neighbors’ fences was correct. I also noticed that the other branches I saw in the other corner of the backyard were also larger than I originally thought.

Next weekend I think that I will be forced to spend a lot of time cleaning up the mess in my backyard. It’ll be good exercise, right? Later this summer I will have to bring in some professional help to cut the tree down and clean out the remainder of the debris. Anyone want to pull ivy with me? ðŸ˜Š

Who knows, at some point this summer I may have a useable backyard for the first time in many years.

Read The Not-So-Fine Print, Idiot
I was so excited to receive the keyboard case for my new iPad Mini 4 on Saturday. My mobile blogging rig for my trip later this month was going to be complete! The package was delivered early in afternoon and after charging the battery I attempted, and failed, to insert the iPad. With my failure I learned something, the iPad Mini grew in size slightly between iPad Mini 3 and iPad Mini 4, and that I was now in possession of a useless-to-me keyboard case.

Yep, I had ordered the wrong thing.

Fortunately for me all was not lost because Amazon has a liberal return policy. On Saturday I also learned that Amazon has a brick-and-mortar store near Georgia Tech that is specifically there to handle returns and provide PO Boxes for deliveries. So I boxed up the keyboard case, printed out a return label, and dropped it off at the Amazon store yesterday just before the skies opened up.

Waschsalon Und Hamburger
Tonight’s fun will consist of doing my laundry and then partaking in a dinner of beer and hamburger at Torched Hop.

Hope your weekend was an enjoyable one.