Not All Plans Go To Plan

My calendar contained a dinner meetup last night. I sent a text to my dinnermate but never heard back. Fearing that the person would go to the restaurant under the assumption that a plan had been made, I drove to the restaurant, found street parking, and went inside. The place was crowded, the bar was full, and the host told me that there was an approximate thirty minute wait to get a table. I turned around and left the building. Instead i chose to drive all the way home and save the money I would have spent eating out.

ITP Flickr Pic
“I Feel As If This Foot Bridge Has Stories To Tell” (Black Mountain, North Carolina, United States) 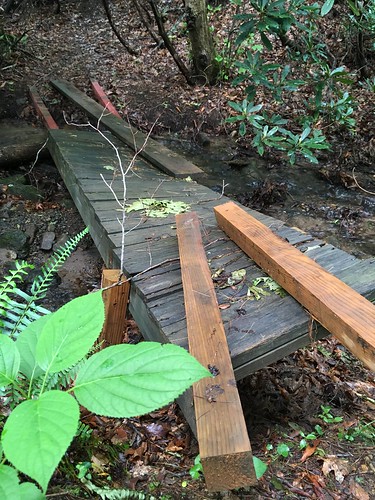 Had to dig into the recent archive for a photo today. I took this while up in North Carolina for LEAF.

My Last Class Of B1
Tonight is my tenth and final class of German B1.4, and marks my completion of the B1 level. I will have nearly a month, which will contain a trip to Germany, before attending my first B1 “Bridge Course”.

Starting in July I will be preparing for the B1 certificate test being offered in Atlanta this Fall.

Eleven Years Ago Today
Eleven years ago today I was interested in someone and made the decision to show up to the end of the “Chicks No Dicks” hash at The Graveyard Tavern in East Atlanta to see her. To my dismay I was summarily booed out of the bar by the hashers.

To add injury to insult, that was also the day I contracted one of the worst cases of food poisoning that i have ever suffered, compliments of Lettice Surprise You, where I had eaten lunch that day.

Eleven years? Where has the time gone?

7 Responses to Not All Plans Go To Plan