I’ve cooked jambalaya for so long that I continue to take liberties with my tried and true recipe. The version I concocted the other night not only used basmati rice, as I’ve been using for some time, but this version also had two different types of German sausage instead of the prescribed andouille. While the wurst doesn’t have the same heft as a good andouille it was a good enough substitute given that it was what I had in the refrigerator.

Oh To Be Young And Idealistic Again
As the crowd assembled for last night’s Green Eggs and Ham event a friendly and attractive young lady intown cyclist sat at my table. We chatted for short while about bike commuting in Atlanta before two other guys joined our table and diverted her attention.

Last night’s panel had a representative for Buford Highway, the Memorial Corridor (from the Capital to Candler Road), and “south” downtown. In my mind these three regions couldn’t be any different in their outlook of the future. The wild card of the three is “south” downtown, comprising of areas like Castleberry Hill. The discussion had was far more optimistic than I could swallow. Perhaps it’s my age, perhaps it’s my pessimistic nature, but I just couldn’t buy into their dreams.

Originally I was going to remain at Manuel’s Tavern and eat dinner, but once again some light appetizers were provided so I wasn’t all that hungry. That didn’t stop me from returning home and eating the last Tupperware of my multi-cultural jambalaya for dinner, however. 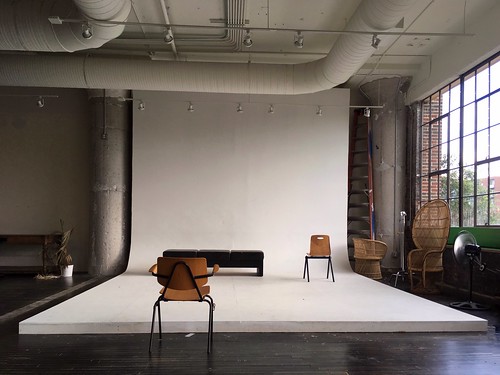 This setup is in a store called “Citizen Supply” (I think) in Ponce City Market. It is reminiscent of the lofts in Dwell magazine over which I drool.

Book’em Paulie
After coming out of LA Fitness on Monday I had some time to kill before heading to Ponce City Market. In the same shopping center as LA Fitness sits a Half-Price Book store. I walked inside repeating “You don’t need any books. Do not buy any books.” to myself. I put up a good fight until I discovered a section of books in German. These books were not text books, or grammar books, but rather novels. I wound up buying one book, David Sedaris’s “Barrel Fever” (F) because it didn’t appear to use a lot of complex language.

Nobody Puts Paulie In The Corner
Well, “XYZ Corp” does as today is the day our restructing occurs and me being low man on the totem pole am getting the shitty corner “cube”, which is not really a cube at all. At least it appears that I’ll be keeping a motorized standup desk, though one not as nice as the one in my current space. If I remain at “XYZ Corp” for awhile and a different space opens you bet your ass that I’ll be requesting a transfer.

Have a great Wednesday, and return tomorrow to read about my $4 failure this morning…

16 Responses to My Multi-Cultural Jambalaya