During the past few years these used to be the days for which I waited. With the warm weather and early-morning sunrise I’d get up to the Perimeter Mall area and get a good twenty-five mile ride in prior to work. Yesterday I was up early like but instead of getting out on my bike I drove up to the LA Fitness in Atlantic Station.

My current workout routine is roughly one hour long, so I had no concern that the free parking window for Atlantic Station is two hours. However once you factor in walking to/from the club, shaving/showering, time spent wiping down equipment, and stretching my “one hour” workout took nearly two hours.

When I got back near my car yesterday and put my parking ticket into the machine I was pleased to see that I owed no money. I got into the M6, missed the exit turn, and by the time I turned around and reached the exit gate, where I had to insert the ticket once again, two hours and one minute had passed and I owed $4 in order to get out of the parking deck. DANGEN!

I have two options for going to LA Fitness in the future:

I would also be pleased if I could figure out how to make my back stop hurting. I hoped the stretching that I did post-workout would do the trick, but the pain I am suffering tells me otherwise.

One Burrito, Two Burrito
For lunch yesterday I walked over to the Woodruff Arts Center to see the food truck offerings at lunch time. I was unimpressed. In fact, though I may try again today, the novelty of food trucks, and their seemingly high prices, is waning for me.

Since I passed on the trucks i had the brilliant idea to walk over to Colony Square and eat some Mediterranean food from Cedars. I had eaten Cedars’s food about a month ago and was quite pleased. Lo and behold, when I got inside Colony Squar I was saddened to see that Cedars has closed permanently. This marks the third Colony Square restaurant to close shop in the past five months. I settled for a mediocre burrito from Moe’s.

Unless you call having dinner at El Myriachi while the skies open and dump rain on Kirkwood then I didn’t do anything big last night. I am not sure why I went for Mexican for dinner, perhaps it was to sit under a covered patio and make up for the sub-standard Mexican I had eaten for lunch. 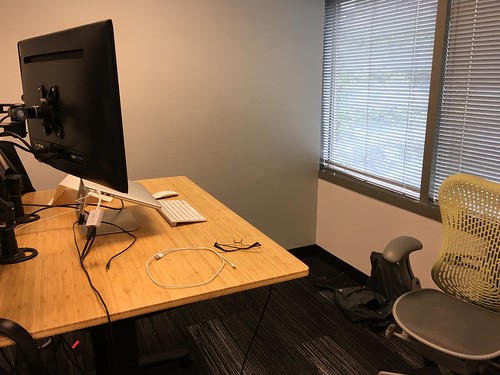 Here it is, my new cubicle workspace. To give you some sense of scale the desk shown is four feet wide. I have plenty of space, and don’t think that I will mind having my back to the window. I took this photo from the work area of one of my coworkers, otherwise I might have turned the desk 90Â° such that this photo would have shown the back of my monitors.

Tonightâ€™s Calendar Event
Tonight I will be going to Horizon Theatre for their performance of “How To Use A Knife”. This is the performance I mentioned and invited you all to join me, but unfortunately no one showed interest. Before the show I’ll have a beer and dinner at a local restaurant, where I go will depend on the weather.

8 Responses to My $4 Minute