I’m A Man Without A Plan

As I continue to flutter through this life unattached, and continually trying to figure out what I want out of it, I frustrate myself.

“Sell the house, move to the mountains!”
“Fix up the house, live there the rest of your life!”
“Sell everything that doesn’t fit in the M6 and travel!”

If I could just make “A Plan” I feel as if I would be better off. I thought that my nine-month hiatus would’ve helped, but it did not.

A Tale Of Two Bike Shops
When I signed up for Jackson Brevet I was full of piss and vinegar to ride, ride, ride. I have not had much cycle lust after my fall.

Also when I signed up for Jackson Brevet I thought that the packet pickup was at Atlanta Cycling on Piedmont as I remembered it being last year. I was wrong, it was at Peachtree Bikes in Buckhead. About the only good thing I can say about this was that I found a street parking lot and after inserting 15Â¢ into the parking meter I realized that there was enough time on the meter already for me to go in and out.

Am I going to ride tomorrow? I still don’t know, all signs point toward “Unlikely”. 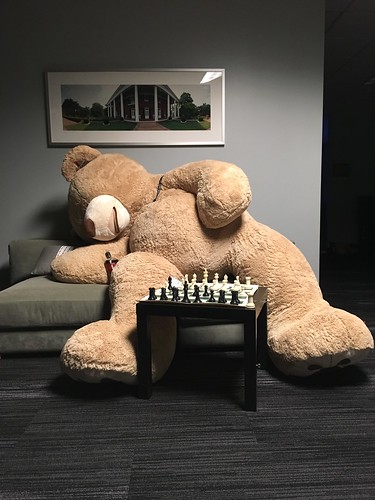 How do you know you are working for a company that caters to millennials? The company has a humongous stuffed teddy bear, whose name is naturally “Ted E. Bear” or so says his name badge.

Back To Plays Worth Seeing
Last night’s trip to Horizon Theatre was worthwhile even if I didn’t get dinner for fear of being caught in the downpour that never happened.

“How to Use a Knife” is typical theater – implausible serious themes mixed with a bit of humor. The plot follows a down-and-out chef who has taken a position at his former line cook’s restaurant. The chef, who ruined his career with drugs and alcohol, befriends the dishwasher who we find out used to be a soldier in Rwanda and now is being sought for War Crimes. Each man has deep-rooted secrets revealed throughout the 115 minute play, with no intermission. This last fact may be the worst thing about the play, as it’s a lost opportunity for the theater to sell more alcohol, and it deprives the patrons the ability to pee mid-play. Though there were some minor slip ups, the performances of the four main actors were really strong.

Taking Liberties
I woke early enough to drive all the way to LA Fitness In Ansley Mall. The irony of driving past 17th Street, the exit I would take for the Atlantic Station LA Fitness in order to go to Ansley Mall was not lost on me. However, I am not in the mood to be rushed today.

I am currently ruining that workout with a lovely and relaxing breakfast at Folk Art before I head into “XYZ Corp”‘s office.

This afternoon I will be meeting my friends Hank and Bill at Eleventh Street Pub, a place I frequented twenty-two years ago when it was then the original location of The Vortex.

11 Responses to I’m A Man Without A Plan