The Rain In Spain Falls Mostly On DÃ¼sseldorf

You could not have timed the rain any worse for the Tour de France; it started just before the beginning of yesterday’s stage, lasted almost throughout the time trial, and then cleared up about an hour after the stage ended.

I had a good time hanging out with my friend from German class who had arrived yesterday morning, and will be heading out to parts unknown today. We walked a lot, getting lost on our way to Altstadt, drank a lot of beer, and ate a lot of food.

While it was my ambition to watch the tour and see its stars ride, I caved to the weather and the crowds that lined the streets. I didn’t see much of the action occur, and because the camera I brought on this trip isn’t exactly “weathersealed” it never made it out of the bag.

Here is a shot that I took with my iPhone, and have cropped significantly: 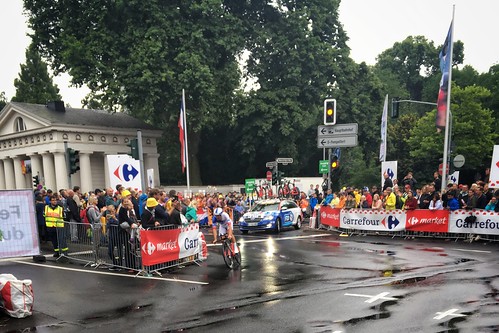 This point in the race was perhaps two-thirds through the 14km route and at a tricky chicane.

I had the brilliant idea to watch yesterday’s stage using the NBC Sports iOS app even though it was well past 10:30pm when I got back to my hotel’s bed. My effort was thwarted by the evils of “Digital Rights Management” because even when I tried to present myself as being in the US by changing my VPN the app’s ability to use my location blocked Tour de France coverage in the app. Arg!

Today I will get out to watch the peloton pass by, and then I don’t know what I will do with the rest of my Sunday.

Tomorrow I will be off to Heidelberg, and will most likely be there by the time you read the blog.

5 Responses to The Rain In Spain Falls Mostly On DÃ¼sseldorf