If you are reading this in the States then just like Le Tour de France I have left DÃ¼sseldorf. My time in DÃ¼sseldorf has been trying at times, but overall it has been a great stay.

A Tale Of Two Peters
Yesterday I finally got to see the Tour de France up close and personal, and grabbed a few images.

I started the morning by camping out on a corner in the Altstadt for over an hour to ensure that I would finally get some photos without the encumbrance of people in front of me. What I failed to take into account is how long it would take the Nikon 1 V1 to finally start shooting in burst mode. But thankfully for recognition’s sake some top riders, Peter Sagan, don’t normally ride up front. 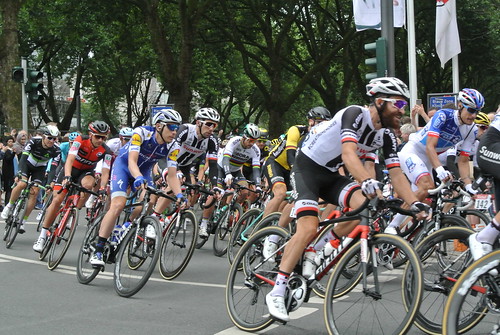 That’s Sagan in the middle with the rainbow-striped World Champion’s jersey.

When the neutralized start headed out of town I hoofed it across the Rhine, with many other people, in an attempt to find a spot to shoot the riders in full-on race mode. Because of the people in front of me as we looked down the road I had to shoot blind so most of these shots are unfortunately focused on the people across the street instead of the riders. I am blaming the photographer, not the camera. Anyway, here’s Sagan again, this time being camera shy: 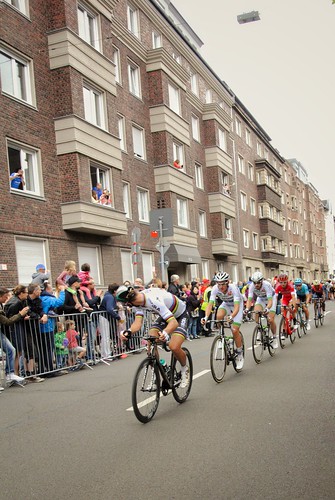 I kept trying to find a better spot but when the security guy barked something in German at me the third time I crossed the road I thought it best to stay put. It’s not like the riders were anywhere near yet, but why press my luck..

Uh Oh
With the Tour on its way toward Belgium I walked around trying to take more photos, this time of a carnival/amusement park being constructed when the rain started again. I managed to walk back over the Rhine in a light, but steady rain and then waited under the bridge for the rain to subside. When the rain stopped I headed to yet another brewery for a few Alt Biers and to watch the tour progress on TV.

The food prices at the brewery seemed steep to me, so I walked through Altstadt looking for food. I ate a huge schnitzel with yet another beer for my lunch/dinner, and finally had two more beers at an Irish pub (I was only going to have one, but then the skies opened again so I stayed for another), before I returned to the hotel and passed out for a few hours.

I’m On A Data Diet
I have been worried about running out of Euros, I should have been worried about running out of AT&T international data. Before I left the States I forked over $60 for a mere 300MB of data. Yesterday I received a message from AT&T alerting me that I have used 80% of that; my trip is only 33% complete. Looks as if I need to start finding more hotspots and using the downloaded maps instead of interactive ones.

Playing With Processing
One of the benefits of having photos uploaded to the cloud, which I have limited to doing until I have WiFi, is that I can use a multitude of iOS apps to post-process them. I have two favorite editing apps at the moment — Snapseed (which will someday be abandoned by Google as they did with Nik Software’s editing suite for Mac/PC), and Photoshop Fix.

Sometimes I admit that I get carried away with the post-processing, and sometimes it’s the only way to “save” an image that I think is too soft. Like this one: 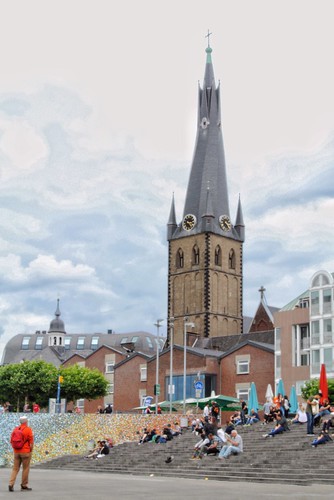 I wasn’t overly enthused by the out-of-camera image, but I played around with it and feel that it now has a kinda painterly feel about it. I’m okay with this.

OMFG
Whatever I spent on this Bluetooth keyboard has paid off in spades! You may recall that I’ve whined in the past about trying to copy the Flickr URL when mobile blogging. Well, as I write this I realized that I can highlight the URL using CMD-A and then copy it using CMD-C just like I would on a Mac. No longer will I have to constantly poke at the URL in the pop up, hoping to select it all instead of a portion, and then tap it just right in order to bring up the Copy/Paste menu instead of deselecting it. This has made blogging so much easier for me!

Hope your weekend was a good one.