Heidelberg is a much different city than I expected it to be. I was thinking small town, like many of those into which I cycled last year. I guess I expected some sort of Alpine village vibe. It doesn’t have that at all. And while it is not a large city, Heidelberg has much more of a city feel than I anticipated.

A Lot Less Jingle, Jangle, Jingle
I am not good at remembering to pay with coins instead of bills, so I assembled a decent pile of coins on my hotel table during my time in DÃ¼sseldorf. Yesterday for my breakfast I paid the â‚¬4.35 using only one coin larger than a 50-cent piece! Like a homeless person I gave the guy a handful of change, twenty-two coins; here’s breakdown — one 1 Euro, two 50-cent, ten 10-cent, six 20-cent, and three 5-cent. Woot! Woot!

Welcome To Not-Your-Family Vacation, Paulie
Once again the Deutsche Bahn ticket vending machines wouldn’t allow me to purchase a ticket using my credit card. So, in DÃ¼sseldorf I went into the travel center and purchased my ticket to Heidelberg. Because a First Class ticket was “only” â‚¬11 more than Second Class, I decided to treat myself.

What did I get for my upgrade? A cup of coffee in the DB Lounge before the train departed.

A First Class cabin is designed for six people and when I arrived at mine a family of four were already inside. For three hours it was me, and this family from Australia. Wouldn’t you know, they were also headed to Heidelberg.

You’d think “First Class” seating would also get you perks like super fast WiFi, or free drinks and snacks during the train ride, but this was not the case. First I was never able to get the WiFi signal on the train at all (unlike when I was in the lowly Second Class seat last week). Second, when the drink guy came around I had to pay â‚¬3 (which is the same cost for my complete breakfast this morning at the hostel) for a mediocre cup of coffee.

I think I will saving money and riding Second Class from here on.

Hello Rhine, My Old Friend
The train ride itself was fine. As we headed south and east we followed the same path that I rode on the train last year when I went from KÃ¶ln to Mainz, and then back again on bicycle from Mainz to KÃ¶ln.

The weather was beautiful so it was fun recollecting my journey from last year. 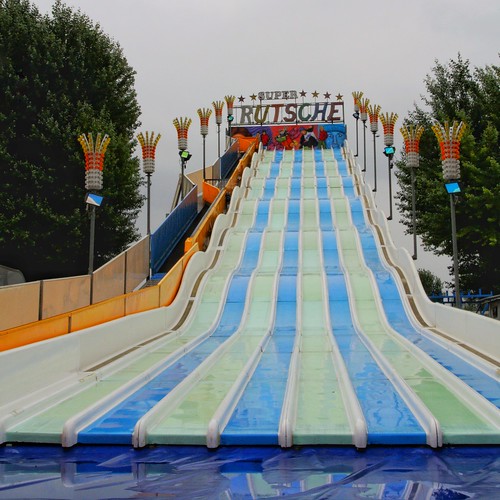 This is a shot I took at the amusement park that was being constructed when I was in DÃ¼sseldorf this week. 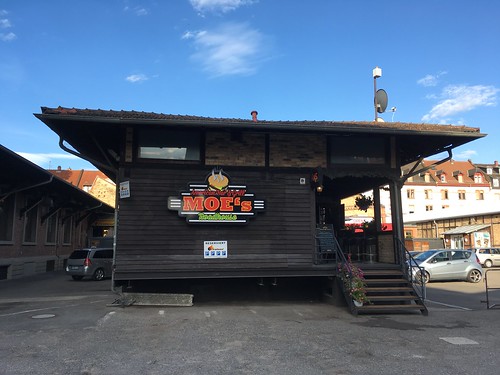 This restaurant (and bowling alley!) is right next to the hostel in which I am staying in Heidelberg. I admit internally saying “Welcome to Moe’s!” when I walked past it the first time. I chuckled when I was returning to the hostel later on in the evening and heard a guy walking toward me exclaim the same sentiment to his female companion. It’s a small world after all…

Notice the difference in skies between DÃ¼sseldorf on Sunday and Heidelberg yesterday.

With No Tour To Watch, I’ve Turned To Documentaries
Prior to leaving for Germany I downloaded a couple of documentaries to my iPad. Because I cannot watch the tour replay at night, heck there isn’t even a television in my hostel room, I have turned to watching some of these. One of the documentaries is “Stop At Nothing: The Lance Armstrong Story”.

I’ve talked about once being a fan of Armstrong in the past prior to finding out the truth, and have come to grips with his current situation. I’ve even continued to listening to his podcast “The Forward” after he called Atlanta the worst city in America, and have started listing to his new podcast “Stages” which is a daily recap of each day’s tour stage.

This documentary is pretty scathing regarding Armstrong’s behavior both during and after his racing career, and the way he reacted to Betsy and Frankie Andreu. Frankie was one of Lance’s teammates of course, and Besty is Frankie’s wife and a no-bullshit woman. Most of you will have no desire to watch this documentary, but I thought it was well done.

Happy Birthday, ‘Merica
Could you all figure out how to get rid of Trump by the time I return? Thanks!

I have a feeling that I will have trouble finding celebrations with fireworks here in Heidelberg.

Hope you are getting a day off from work, and making the best of it.