Welcome Back (to me)

Hello again. I am back on the west side of the Atlantic Ocean. Part of me is sad about this, part of me is ready to get back to my f*cked-up normal life. I have to admit blogging is much easier when I have a six-hour time advantage. 🙂

By the time I walked all the way to baggage claim, cleared customs (LOVE Global Entry!), waited for my bag, waited for a Lyft, and got back to the ITP Estate it was about 5:30pm. Given that I had woken up in Germany my body’s internal clock was at 11:30pm, so it wasn’t a shock that I decided to skip trying to rush to my first German class of the session.

I slept intermittently during the early evening and through the night, it will be interesting to see how I feel later today.

One Night In Frankfurt
In 2014 Frankfurt was the first Germany city in which I ever stepped foot. In fact, it was also the first time I had ever been out of North America. I was such a noob, that I hadn’t even booked a hotel room by the time I stepped off the train in Frankfurt’s central train station. I walked three blocks and found a Comfort hotel.

I was surprised why there weren’t many hotel options this time around. I found out that I had arrived the day after an Iron Man triathlon was held in Frankfurt.

I walked around Frankfurt refreshing my memories from 2014, but failed to find the bar in which I sat for awhile back then. Pity. I found another one, however. ðŸ˜‚ In the center of the city I sat at a bar talking with two guys in from Australia (not triathletes), and was served by a Latvian bartender who used to live in California when he was pursuing his dream to play hockey, and a waitress who had moved to Germany from Ukraine. It’s a small world after all…

I was up and out of the hotel super early on Tuesday morning because the room was warm (no A/C), the WiFi was dreadful, I had no hunger for breakfast, and I wasn’t sure how long it would take me to commute to the airport via the train.

The flight was fine, except for the 6’5″ man in front of me who was either trying to break his seat or set a new World’s Record for airline seat reclining. His long legs allowed him to put his unshoed feet against the bulkhead and lean back as far as he possibly could. Ugh. 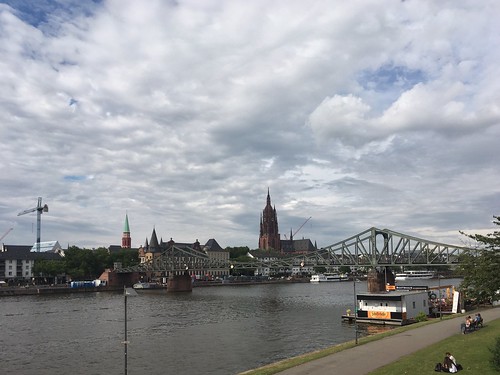 A fairly mundane shot of Frankfurt taken with my iPhone. I have “better” shots taken with my Nikon 1 V1, but have not had the time to import and edit them.

“My Last Dinner Of This Germany Trip” (Frankfurt am Main, Germany) 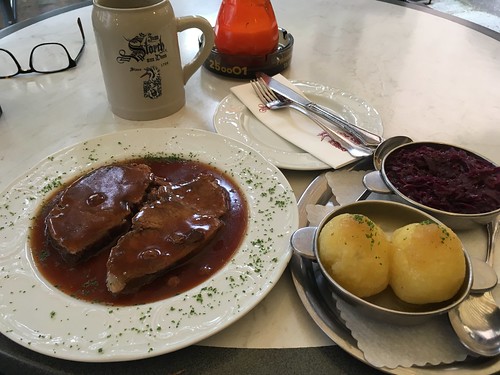 If you ever need to know how to gain weight on vacation, simply consult me. This was my last dinner for this trip to Germany, beef with dumplings and sauerkraut. Yes, there is also a stein of beer. Not pictured was the dessert of ice cream, strawberries, and cream consumed with a cup of coffee. Did I mention that this meal was eaten shortly after I sat in a bar and had three large beers?

Catch-up Day
Today will be a day of doing some chores — laundry, auto emissions, and perhaps lawn mowing — before making my way to World of Beer (that’s still on, correct?). Tomorrow will mark the end of my devil-may-care attitude toward drinking and eating too much. Pity.

Make it a happy Wednesday.

13 Responses to Welcome Back (to me)